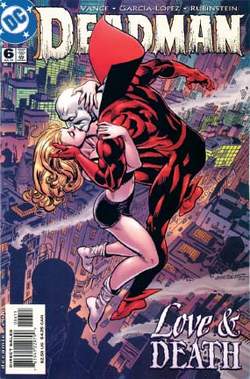 Despite never gaining the high sales it deserved, Deadman has been one of the most influential and critically acclaimed characters in superhero comics. Deadman was conceived by maverick writer Arnold Drake in 1967 and first appeared in the pages of Strange Adventures #205, in what was to be artist Carmine Infantino’s last strip before becoming editor-in-chief of DC Comics. The tale starts with the death of its star, Boston Brand, a daredevil trapeze artist assassinated by a sniper in the middle of his act. But death is not the end for Brand, as a disembodied voice (of Rama Krishna, a sort of god) tells him that to avenge his death he must roam the earth in ghostly form until he finds his killer. Unfortunately, the only clue to the killer’s identity is that he has a hook on his arm, but Brand now has the convenient ability to enter people’s bodies and take them over.

The strip was blessed with an unusual setting—Brand’s circus with its colorful performers— an intriguing quest at its heart, and an unconventional, complex hero. Brand was an argumentative, egotistical, and somewhat self-pitying character who, despite his powers and stylish costume (as a ghost, he still wore his acrobat’s red high-wire outfit, complete with white death’s-head mask), was no better than the reader. In 1967, this was revolutionary content and in retrospect Brand can be seen as the first “mature” superhero. Another revolutionary factor in the strip’s critical appeal was the art of Neal Adams, who took over the feature for its second installment. Adams came to the strip from the world of advertising and newspaper strips, and brought a realism to comic books that had never been seen before. He also had a gift for dynamic drawing and stylish design; Deadman was peppered with pop-art effects and witty in-jokes. In short, this was a very cool comic.

Over the next two years, Deadman roamed the country endlessly, tracking down the Hook in what was very much the comic book equivalent of the 1960s television show The Fugitive. In his travels, he came across supervillains (such as the Eagle), drug pushers, Batman, and a group of killers called the League of Assassins. The strip’s complexity and depth were perhaps too much to take for most readers, and after its twelfth installment, the series was canceled. Undeterred by this, Adams went on to draw further Deadman appearances in numerous comics, including Aquaman, The Justice League, The Brave and the Bold, and Challengers of the Unknown. Editors finally revealed Deadman’s killer to be an assassin in the pay of a mysterious criminal called Sensei, and the pair went on to tangle with each other throughout the 1970s.

While it is true that Deadman was then relegated to a relatively minor status, he nevertheless continued to appear in backup spots in Adventure Comics and Phantom Stranger, which were notable for their high quality. A 1986 miniseries—the first of six relaunches as of 2004—drawn by José Luis Garcia Lopez (Adams’ talented successor on the strip), featured a final showdown with Sensei. The strip showed Deadman finally regaining his human form only to lose it again, vowing to continue his fight against evil, wherever it may appear. For a while later on in the decade, DC repositioned him as a horror character, now looking more like a living skeleton than a well-toned superhero, but recent miniseries have been very much in the intelligent, elegant tradition of Deadman’s early days.

As a commercial project, the strip has never rewarded DC’s continued faith in it, though the publisher has repackaged the Adams run on several occasions, as have several European publishers (the feature is highly regarded across Europe). But in introducing the concept of “serious” superhero strips, Deadman was clearly the precursor to the likes of Watchmen and The Dark Knight Returns, and it is now widely viewed as one of the key strips of the 1960s. Deadman joined the title team in the comic book series Justice League Dark, which debuted in September 2011. —DAR

A buried concrete block, log, plate, or the like, which serves as an anchorage, e.g., as an anchor for a tie to a retaining wall; depends on its own weight and passive pressure from the soil to hold it in place.
McGraw-Hill Dictionary of Architecture and Construction. Copyright © 2003 by McGraw-Hill Companies, Inc.

Feedback
Flashcards & Bookmarks ?
Please log in or register to use Flashcards and Bookmarks. You can also log in with
Flashcards ?
My bookmarks ?
+ Add current page to bookmarks
Mentioned in ?
References in periodicals archive ?
Mrs Deadman said: "It's a good idea to have someone come round and let us know they're skipping lessons.
It's good to talk
In this paper we report forecasts of recorded property crimes in England and Wales using the model of Pyle and Deadman (1994).
Forecasting recorded property crime using a time-series econometric model
A rule of thumb many landscapers use is to install one deadman for every 16 sq.
Timber retaining wall
In a message in the racecard, Julie Deadman wrote that her father gained so much enjoyment from racing, both as an owner and enthusiast, and would have been delighted by the classy field assembled for the two divisions of the maiden carrying his name.
Hag gas teame ye Doncaster for speedy Rosdhu
And although there were protests, led by Joey Barton, Ramage cut a devastated figure when ref Darren Deadman flashed a straight red card for a professional foul at the Queens Park Rangers stopper.
Peter: Fair play to Toon heroes; Ramage reveals red card protests
But in a tense atmosphere which saw a pitch invasion, a firework on the pitch and Gannon and opposing manager Paul Lambert squaring up in the technical area, it was the performance of referee Darren Deadman which incensed Gannon.
LEAGUE TWO PLAY-OFF
The deadman's name has not yet been released and police are trying to trace his family.
MAN HELD ON VALLEYS MURDER CHARGE; Police find a man's body in his home
Dons' leading scorer Izzy McLeod went down on the edge of the area following a challenge from Simon Marples and referee Darren Deadman immediately pointed to the spot.
Football: Dons heap more home misery on faltering Chester; COCA COLA LEAGUE ONE/LEAGUE TWO
Defence solicitor Dave Deadman said problems started when Fay moved from her father's home to live with her mother when she was 13.
Truant teen's mum in court
The fully electric walkie with AC travel drive is engineered with a variety of safety features that include an easily accessible emergency stop button, a "deadman" braking system that is activated when the control handle is released, and a reversing "belly button" switch that reduces the chance for injury.
Electric pallet trucks
The tragic pal, Warren Deadman, was killed after a vital piece of equipment - known as a "deadman" - broke free from a frozen cliff-face in the French Alps as he abseiled.
THE SURVIVOR; Man clings to ledge for 18 hours after pal dies
William Deadman (24), who admitted assaulting Ian Crees, was ordered to pay pounds 500 compensation to his victim and was put on a community rehabilitation order for two years.
Pop fan ordered to pay pounds 500