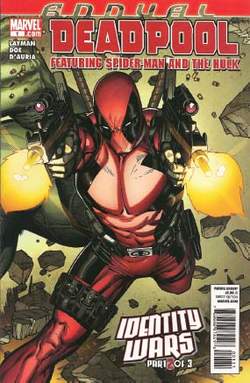 Deadpool is a prime example of a supervillain who not only evolved into an antihero but also became a star of his own comic books. Created by artist Rob Liefeld and writer Fabian Nicieza, Deadpool debuted in Marvel’s New Mutants #98 (February 1991), as a costumed mercenary hired to kill the New Mutants and their leader Cable. Deadpool went on to appearances in X-Force and other Marvel titles and became surprisingly popular with the readers. Probably this was because Deadpool became known as the “Merc with a Mouth,” since he keeps up a constant stream of wisecracks and banter, as if he were a crazed criminal version of Spider-Man. Deadpool starred in his first comics miniseries in 1993, and graduated to his first ongoing series in 1997. Ever since then, Deadpool has appeared in numerous series of his own and made guest appearances in other Marvel series.

As Deadpool became a star in his own right, he became more of an antihero than a true villain. Sometimes he still operates as a criminal, but other times he teams up with superheroes, as in the Cable & Deadpool series (2004–2008), which paired him with a man he had once been hired to kill. In 2011 he joined the superhero team X-Force.

Deadpool stories have strong satiric elements, and Deadpool, like John Byrne’s version of the She-Hulk, frequently “breaks the fourth wall”: he knows he is in a comic book, and will directly talk to the reader.

Deadpool’s real name is (or possibly is not) Wade Wilson. Suffering from cancer, Wilson volunteered to undergo experiments at the United States government’s Weapon X program, which was attempting to create the equivalent of Wolverine’s superhuman self-healing ability. The experiments initially, severely disfigured Wilson’s face and left him mentally unstable. As a result, Wilson was confined in a facility for rejects from the Weapon X program. There the other inmates gambled in a “deadpool” on who would die next, and they bet that Wilson would die soon. But instead Wilson survived: he developed the healing factor that is his principal superpower, enabling him to recover rapidly from virtually any injury, thus making him virtually unkillable (though he remains disfigured and insane). Adopting the name Deadpool, he became the costumed mercenary who first appeared in New Mutants.

Deadpool made his live action film debut in X-Men Origins: Wolverine (2009), in which Ryan Reynolds plays Wade Wilson before he gets his superpowers, and Scott Adkins plays him after he becomes the disfigured Deadpool. In 2011 a Deadpool feature film was being developed, in which Reynolds was slated to play the title role. —PS

(pop culture)
Presumably Marvel Comics' anti-hero Deadpool derived his name from Clint Eastwood's final Dirty Harry movie, The Dead Pool (1988). But Eastwood's Harry Callahan is a police officer who harshly metes out justice and is a man of severe demeanor and few words. Deadpool, on the other hand, is a mercenary who operates outside the law and has a manic personality, continually rattling off stream-of-consciousness repartee. In this respect Deadpool is like an outlaw Spider-Man on speed, and they even wear similar costumes. Deadpool is often called “the Merc with a Mouth.” Created by artist Rob Liefeld and scripter Fabian Nicieza in New Mutants #98 (1991), Deadpool was originally presented as a villain who battled Cable, the original X-Force, and Wolverine. Probably due to his wild sense of humor and panache, Deadpool became so popular that he starred in his own comics miniseries (Deadpool: The Circle Chase, 1993, and Deadpool, 1994), and graduated to his own regular monthly comic book (Deadpool, 1997–2002). Thus Deadpool is another example of the villain who evolves into a hero, or, in his case, anti-hero with emotional depth beneath his banter. Though he remained an outlaw, Deadpool's stories pit him against considerably more evil opponents. Deadpool's first name appears to be Jack, but his last name remains unknown. He became a mercenary, and once, when injured, was taken in and nursed back to health by a couple named Wade and Mercedes Wilson. Intending to steal his identity, Jack attacked and seemingly murdered Wade but unintentionally killed Mercedes as well. Guilt over Mercedes' death shook Jack's sanity, and he came to believe he was Wade Wilson. Eventually “Wilson” contracted terminal cancer and volunteered to be a test subject for the U.S./Canadian “Weapon X” project, the same operation that had experimented on Wolverine. “Wilson” was endowed with a superhuman “healing factor,” said to be based on Wolverine's, which halted the progress of his cancer. “Wilson's” healing factor is so powerful that not only can he recover from injuries at superhuman speed, but at its peak capacity his healing factor can regenerate entire body organs, even his heart. The healing factor also enhanced “Wilson's” strength, agility, and reflexes to superhuman levels. However, the interaction of the healing factor with “Wilson's” cancer grotesquely disfigured his face and further worsened his mental stability. “Wilson” became a special operative for Canada's “Department K,” but due to ill health was sent to the Hospice, a medical facility where a Doctor Killebrew secretly experimented on his superhuman patients. These patients held a “deadpool” in which they bet on how long each of them would live. After escaping, “Wilson” adopted the name “Deadpool” and eventually returned to working as a mercenary in his new costumed identity. Deadpool's most persistent enemy is a rival assassin, T-Ray, who proved not only to be adept at sorcery, but also to be the real Wade Wilson, who magically resurrected Mercedes. In 2004 Deadpool began starring in a new comics series, Cable/Deadpool, which teamed him up with his former adversary.
The Supervillain Book: The Evil Side of Comics and Hollywood © 2006 Visible Ink Press®. All rights reserved.

Feedback
Flashcards & Bookmarks ?
Please log in or register to use Flashcards and Bookmarks. You can also log in with
Flashcards ?
My bookmarks ?
+ Add current page to bookmarks
Mentioned in ?
References in periodicals archive ?
In "(https://www.cheatsheet.com/entertainment/ryan-reynolds-explains-how-he-got-brad-pitt-to-make-a-cameo-in-deadpool-2.html/) Deadpool 2 ," Vanisher was one of the titular character's invisible allies from the X-Force, a group of mutant rogues assembled by Wade Wilson to protect a young boy from the villainous Cable.
How Ryan Reynolds Convinced Brad Pitt To Appear In 'Deadpool 2'
Reborn as Deadpool, Wade sets out to wreak revenge on Ajax and his underlings.
WATCH IT
I did about an hour of motion capture and performance capture on Deadpool 2 as Juggernaut.
Ryan Reynolds on 'Pikachu' and the future of 'Deadpool'
As per details, the Desi Deadpool back in 2016 used to highlight different interesting issues in video clip produced by SK Productions.
Desi Deadpool surprises people across Pakistan
And Deadpool in Lahore is pretty much where he should end up in the upcoming films.
Desi Deadpool comes to Lahore
In 2015, Jackman (https://www.instagram.com/p/93ezkEChH1/) posted a video of Reynolds in full Deadpool makeup mocking him in an Australian accent.
Ryan Reynolds, Hugh Jackman Team Up For New Ads
"Once Upon A Deadpool" will feature a fairytale twist and 20 minutes of never-before-seen footage from the sequel of the Marvel Cinematic Universe superhero movie.
WATCH: Kid-friendly 'Once Upon a Deadpool' trailer
The film is the filtered and kid-friendly version of Deadpool 2 movie, now rated PG (Parental Guidance) by the MTRCB.
Kid-friendly Deadpool returns in 'Once Upon A Deadpool'
As a foul-mouthed, fourth-wall-breaking antihero, much of Deadpool's appeal is that he is the rare Marvel character leading an R-rated superhero franchise.
'Once Upon on a Deadpool' film: What you need to know
It's a re-cut of Deadpool 2 and will be released for one night only to help raise money for F*** Cancer - renamed Fudge Cancer for the campaign.
'Family-friendly' Once Upon a Deadpool rated 15 in UK; It will be released for one night only to help raise money for F*** Cancer - renamed Fudge Cancer for the campaign
"Once Upon a Deadpool" is a recut version of the R-rated summer sequel that tones down the language and violence to secure a PG-13 rating.
'Deadpool 2' to be rereleased in a PG-13 version starring Fred Savage
Summary: Washington DC, [USA] Nov 09 (ANI): Actor Ryan Reynolds just unveiled a PG-13 poster of his recently released superhero movie 'Deadpool'.
Ryan Reynolds unveils PG-13 poster of 'Deadpool 2'