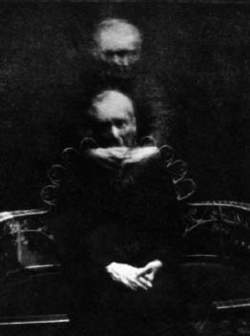 Spirit photograph of medium Ada Emma Deane with her own double taken at the British College of Psychic Science. Courtesy Fortean Picture Library.

Ada Emma Deane was a well known English spirit photographer. A spirit face was discovered on a photograph she took in her studio in June, 1920. This began her psychic career. Initially there was much suspicion when she insisted on keeping the photographic plates to herself, for “magnetizing,” before developing them. By November, 1924, however, she was no longer handling the plates herself. At a sitting at the William T. Stead Borderland Library, she had absolutely no contact with the plates at any time yet the paranormal effects appeared on them just the same.

Dr. Allerton Cushman, Director of the National Laboratories of Washington, had what he described as a “remarkable” sitting with Deane. This was recorded in the Journal of the American Society for Psychical Research (ASPR). Cushman paid an unexpected visit to the British College of Psychic Science in July, 1921. There Deane photographed Cushman and on the finished photograph was a second figure, which Cushman immediately recognized as his daughter Agnes, who had died the previous year.

Psychic investigator Dr. Hereward Carrington wrote in the May, 1925 ASPR Journal about his experiences with Deane on September 5, 1921, “Upon six of my plates curious marks appeared. On two plates these marks were mere smudges,

which are not evidential, though I think curious. On the next plate, however, the result is quite striking. I had silently willed that a shaft of white light should emerge from my right shoulder, and appear on the plate. Sure enough, upon development, a column of white light, surmounted by a sort of psychic cabbage, was distinctly visible. It will be remembered that this was upon my own plate, placed in the camera, and afterwards removed and developed by myself.” The following year Carrington obtained even stranger results, with comet-like lights and a woman’s face, again on his own photographic plates.