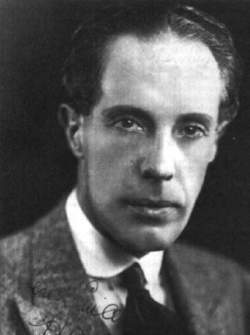 Hamilton Deane, the playwright and director who brought Dracula to the stage, was born near Dublin. His family owned an estate adjacent to that of Bram Stoker‘s father, and his mother had been acquainted with Bram Stoker in her youth. Deane entered the theater as a young man, first appearing in 1899 with the Henry Irving Vacation Company (Stoker worked for Henry Irving in London for many years). Even before he formed his own troupe in the early 1920s, Deane had been thinking about bringing Dracula to the stage. Unable to find a scriptwriter to take on the project, he wrote it himself in a four-week period of inactivity while he was suffering with a severe cold. He also contacted Florence Stoker, Bram’s widow, and negotiated a deal for the dramatic rights.

In order to more easily stage the detailed story, he dropped the book’s beginning and ending sections that occurred in Transylvania. He transformed Quincey P. Morris into a female to accommodate the gender makeup of his company at the time. He also recast the more sinister Dracula of the novel into a representative of cultured continental royalty capable of fitting into British society. Deane was the first to dress Dracula in evening clothes and a cape (an opera cloak).

Deane submitted his play for government approval in 1924. The license was issued on August 5, but censors insisted that one scene be altered. The death of Dracula at the hands of the men had to be changed so that the hammering of the stake was not actually shown. Instead, the men were to gather around the coffin in such a manner as to block the action from the audience.

When the play opened in Derby, England, Deane assumed the role of Abraham Van Helsing, Dracula’s archenemy. Fearing that London critics would pan his play, Deane stayed away for three years, but finally risked an opening there on February 14, 1927, at the Little Theatre. Though the reviews were largely unfavorable, the audiences filled the house each night. By the end of the summer he had moved the production to the larger Duke of York’s Theatre. Following up on a casual remark by a reporter, Deane pulled off an almost legendary publicity stunt. He hired a nurse to be present at each performance to assist any viewers who reacted badly to the play by fainting or taking ill.

Deane’s desire to return to the countryside led to a brief break between himself, Florence Stoker, and one of his backers, Harry Warburton. The split led to Warburton’s commissioning, with Stoker’s approval, a second version of the play (which opened in September 1927), but proved unsuccessful and soon closed. Deane kept the London company running, but at one point had three different groups performing the play at various locations in the countryside.

People were known to memorize entire scenes and to become so involved with the play that they shouted out lines before the actors could deliver them. In 1927 Horace Liveright bought the American dramatic rights from Florence Stoker and hired newspaperman John L. Balderston to edit it for the New York stage. Balderston’s editing constituted a full rewriting, though Deane’s name has been retained on the publication and on the various revisions of the Balderston version. The Universal Pictures movie with Bela Lugosi merely increased the demand in England for Deane to keep his production of the play alive.

In 1939 Deane played the role of Dracula for the first time. Later that year he brought his troupe to the Lyceum Theatre, where Stoker had worked when he wrote the play and where he had staged a one-time-only reading of his work in order to establish his dramatic rights. After a brief run of Dracula and then of Hamlet, the Lyceum closed its doors permanently. During one performance at the Lyceum, Lugosi, who was in the audience, rushed on stage at the close of the play to embrace Deane.

Deane’s last performance as Dracula was in 1941 at St. Helen’s, Lancastershire. After his death late in 1958, his version of the play largely fell into disuse, with most revivalists preferring the Balderston rewrite.