(redirected from Death and immortality)
Also found in: Dictionary, Thesaurus. 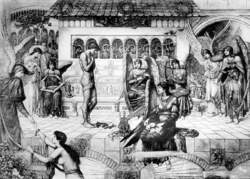 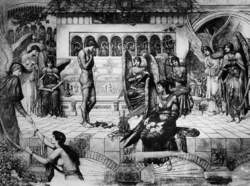 Feedback
Flashcards & Bookmarks ?
Please log in or register to use Flashcards and Bookmarks. You can also log in with
Flashcards ?
My bookmarks ?
+ Add current page to bookmarks
Mentioned in ?
References in periodicals archive ?
Such modified views of reincarnation may be entertaining, but they are hardly satisfying as constructive ways to think about death and immortality. If we desire a serious way to think, we shall have to depart from the domains of theology and science fiction.
A third way to think about death and immortality develops from a moral perspective.
How shall I think about death?
The paper is rigorously researched and organized by numerated sections, looking at death and immortality among Elves and among Men separately, and across five different stages:
1961-73 ("Hints of Confirmation" ["no significant development on themes of death and immortality" [42]])
Alberto Ladavas's "The Wrong Path of the Sub-creator: from the Fall to the Machine and the Escape from Mortality" considers the Numenoreans and the Ringwraiths specifically, two excellent case studies for analyzing themes of death and immortality. Citing from a pair of Tolkien's Letters which declare themes of mortality and immortality in the legendarium (no.
The Broken Scythe: Death and Immortality in the Works of J.R.R. Tolkien
"Death and Immortality" is in three parts: a group of paintings (called Death, all works 1993) that showed "an anonymous man" (who has the face of Stalin) undertaking a dreary suicide in a dreary American motel room; an installation called Immortality that related to the preservation of the Lenin Mausoleum; and a long text that linked "Death and Immortality" to the recent "Monumental Propaganda" show in New York and Moscow, and to a performance done on Lenin's birthday this year at the Mausoleum.
With "Death and Immortality" they have manifested the most basic Soviet survival tool: they are altogether adaptable.
Komar and Melamid