[də¦bī ′sher·ər ‚meth·əd]
(solid-state physics)
An x-ray diffraction method in which the sample, consisting of a powder stuck to a thin fiber or contained in a thin-walled silica tube, is rotated in a monochromatic beam of x-rays, and the diffraction pattern is recorded on a cylindrical film whose axis is parallel to the axis of rotation of the sample.
McGraw-Hill Dictionary of Scientific & Technical Terms, 6E, Copyright © 2003 by The McGraw-Hill Companies, Inc.
The following article is from The Great Soviet Encyclopedia (1979). It might be outdated or ideologically biased.

a method for studying the structure of finely crystalline substances using X-ray diffraction (powdered-crystal method). It was named after P. Debye and the German physicist P. Scherrer, who proposed this method in 1916. A narrow parallel beam of monochromatic X rays, upon falling onto a polycrystalline sample and being reflected by the crystallites that make up the sample, produces a number of coaxial, that is, having one common axis, diffraction cones (Figure 1). The direction of 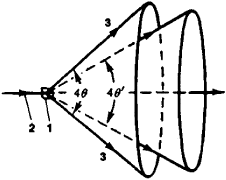 the primary X ray serves as the axis of the cones. Their vertices lie within the object under study, and the apex angles are determined according to the Bragg-Vul’f condition n λ = 2d sin θ (where n is a positive integer, λ is the wavelength of the X rays, d is the distance between the parallel planes of the points of the space crystal lattice, and θ is the angle between the reflecting plane and the incident beam). The cone’s apex angle is equal to four times the value of the angle of reflection ø. The intensity and position of the diffraction cones is recorded on a photographic film or by one of the ionization methods (Figure 2). The interaction of the diffracted beams with the photographic film leaves a trace in

Figure 2. X-ray diagraph of graphite obtained by the Debye-Scherrer method with the aid of an ionization spectograph with monochromatic Kɑ radiation of copper (wavelength λ = 1.54 Å). Numbers designate crystallographic indexes of planes of reflection.

the form of a series of diffraction lines, the shape of which depends on the geometry of X-ray photographing—namely, the mutual position of the sample, photographic film, and incident X-ray beam. The film in some cameras that are used for making roentgenograms of polycrystals is placed on the surface of a cylinder, the axis of which is at right angles to the incident X-ray beam, and the sample is placed on the cylinder’s axis. The arrangement of instruments used in this type of recording is schematically shown in Figure 3. 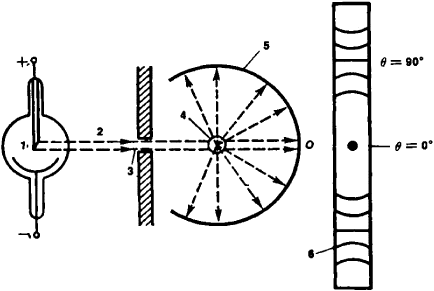 Figure 3. Diagram of the making of a roentgenogram by the Debye-Scherrer method: (1) X-ray tube, (2) beam of monochromatic X rays, (3) diaphragm (slit), (4) crystal, (5) film, and (6) X-ray spectrum. O is the trace left by the beams passing through crystal.

In other cameras the flat film is placed at right angles to the incident X-ray beam so that the beam, which passes through the sample without diffraction, falls onto the center of the film. This method records the full Debye ring, that is, the curve of intersection of the diffraction cone with the photographic film. Powder patterns of this type are usually used for determining the texture (the predominant orientation of crystallites).

Measurement of the apex angles of the cone makes it possible to determine the interplanar distance d using the Bragg-Vul’f equation. In some cases, these data, together with the measurements of the X-ray intensities in each diffraction cone, are sufficient for the complete determination of the crystal lattice structure.

The Debye-Scherrer method is of particular importance for the solution of various technical problems. For example, it may be used for the study of structural changes arising during various treatments of metals and alloys. In the case of plastically deformed crystals, this method makes it possible to determine the presence of the texture in the sample and during heat treatment to observe phase transitions. The Debye-Scherrer method is also widely used in mineralogy and chemistry for the identification of various minerals and chemical compounds.

Feedback
Flashcards & Bookmarks ?
Please log in or register to use Flashcards and Bookmarks. You can also log in with
Flashcards ?
My bookmarks ?
+ Add current page to bookmarks
Mentioned in ?
References in periodicals archive ?
Coarse zirconia has a cubical structure which is inferred from the lattice parameters as indicated from JCPDS file "a = b = c = 5.129 [Angstrom]" with a crystallite size of 5.3 nm to 20 nm and particle size of 900 nm-2.13 [micro]m and the synthesized zirconia after calcination at 750[degrees]C for 4 hours showed monoclinic structure with the lattice parameters indicated from JCPDS file as "a = 5.25, b = 5.204 and c = 5.213 [Angstrom]" with particle size of 50 nm-80 nm and crystallite size of 2-10 nm determined by Debye-Scherrer method calculated using formula D = k[lambda]/[beta] cos [theta].
Synthesis and dielectric studies of monoclinic nanosized zirconia
Non-deformed and recovered samples are analyzed by WAXS, using the Debye-Scherrer method [3].
Study of the crystalline phase orientation in uniaxially stretched polypropylene by Raman spectroscopy: validation and use of a time-resolved measurement method