Ten Commandments or Decalogue [Gr.,=ten words], in the Bible, the summary of divine law given by God to Moses on Mt. Sinai. They have a paramount place in the ethical systems of Judaism, Christianity, and Islam. Listed in the books of Exodus and Deuteronomy, the commandments are divided into divided into duties toward God and toward one's family and neighbors and society. Their normative status is indicated by their prescriptive and unconditional language. They function as general stipulations decreed by God as part of His covenant with the people of Israel. In both Exodus and Deuteronomy, the case law following the listing of the commandments is based on them and deduced from the principles contained in them. In Islamic tradition, Moses brings new revelation in the form of the commandments. 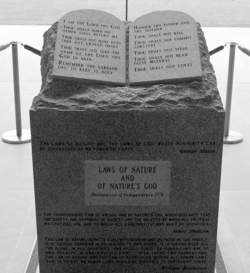 Feedback
Flashcards & Bookmarks ?
Please log in or register to use Flashcards and Bookmarks. You can also log in with
Flashcards ?
My bookmarks ?
+ Add current page to bookmarks
Mentioned in ?
References in periodicals archive ?
The Decalog is not of Moses, nor did God give it to him first.
The Decalog is one of the most, if not the most, censored documents in America today.
They are basic principles of Western law: The Decalog provided the foundation upon which American laws were built.
The commandments are often quoted and cited by American courts: A Lexis computer search by this writer in March 2002 revealed at least 1,100 cases on record in which the terms "Ten Commandments," or "Decalog," or individual commandments by number were cited by American courts of record, that is, by federal courts or state supreme or appellate courts.
Strickling (1899), the West Virginia Supreme Court concluded that his offense did indeed constitute moral turpitude, citing the Decalog's prohibition of adultery:
The Decalog stands at the very heart of Western civilization.
Why Won't the Ten Commandments Just Go Away?