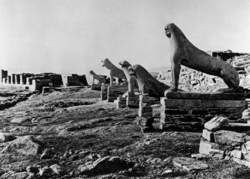 The seventh century BCE Terrace of the Lions is one of many monuments on the Greek island of Delos, once an important center of Greek and Roman religions. Time Life Pictures/Getty Images.

By the seventh century BCE the Greek island of Delos, in the Mirtoan Sea southwest of Athens and north of Crete, had become known as the birthplace of the god Apollo and his twin sister, Artemis. The lake traditionally known as the site of the birth had now dried up. The island’s role in the religious life of the region grew significantly after it came under Athenian control in 540 BCE and through its years of independence, beginning in 314 BCE. It functioned as the religious center for the islands of the Mirtoan Sea and, after 477 BCE, for the lands of the political coalition known as the Delian League, organized by the Athenians. When the Romans took over the island in 166 BCE, the islanders merely added places for the worship of the Roman gods and continued on as before.

Delos operated in tandem with Delphi for much of this time. The oracle of D elphi would spend the six months of winter in Delos before returning to Delphi for the summer, and many would find their way to the island to consult the oracle. Every four years the island would host a festival featuring Olympic-like games.

Delos was covered in shrines to the many Greek (and Roman) deities. Today most are in ruins, and the island has become a gold mine for archeologists. Remnants of three Apollo temples, two Artemis temples and single temples to a spectrum of deities from Dionysius to Isis now dot the landscape.