isomerization (ring enlargement or contraction by one carbon atom) of carbocyclic and some heterocyclic primary amines, occurring during deamination. An example of ring enlargement is denitration of the amine (I) with nitrous acid to give an unstable diazonium salt (II), which decomposes into nitrogen and the carbonium ion (III). The latter undergoes rearrangement and is then stabilized by adding hydroxyl (IV) or losing a proton (V): 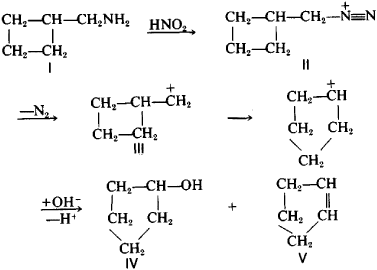 Ring contraction can occur when carbocyclic amines with four- or six-membered rings are treated with nitrous acid; for example, 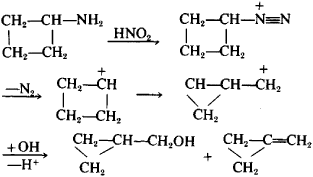 The Dem’ianov rearrangement was discovered by N. Ia. Dem’ianov in 1903.