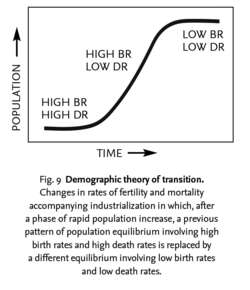 This transition is held to involve three phases (see Fig. 9):

Explanations usually advanced for this pattern of population change are: improvements in public health in phase (b), followed by changes in economic and cultural orientations in phase (c), leading to a reduction in preferred family size.

If this pattern of demographic change can be taken as characterizing the classic historical process of industrialization, the question that today arises is whether the pattern is likely to be repeated in newly industrializing societies, or other contemporary societies undergoing MODERNIZATION. In many of these societies rates of population growth, and levels of social disruption, have been greater than in the middle phase in earlier European patterns of demographic transition. In some societies significant economic growth has been difficult to achieve, and population growth has not been associated with improvements in living standards. It remains to be seen whether a new equilibrium will be established under these very different circumstances.

Feedback
Flashcards & Bookmarks ?
Please log in or register to use Flashcards and Bookmarks. You can also log in with
Flashcards ?
My bookmarks ?
+ Add current page to bookmarks
Mentioned in ?
References in periodicals archive ?
Fertility has declined in places where neither modern contraception nor the demographic transition model can account for the trend, such as Sudan, Burma, and Bangladesh, and historically in Yap, Tikopia, and many other pre-modern, but now industrialized, countries.(40) The decline occurs when ordinary people experience a threat to their livelihood or accustomed quality of life.
Allowing fertility decline: 200 years after Malthus's essay on population