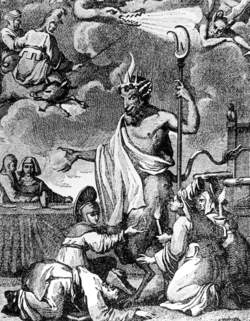 The word demon is from the Greek daimon, meaning a spirit or divine power that may be either good or bad. The early Church condemned all Pagan spirits as being evil, giving the word demon its present negative connotation. Demonology is the study and classification of demons.

In the Middle Ages, Ceremonial Magicians tried to establish the number and hierarchy of demons. Alphonsus de Spina, in 1459, stated that there were 133,306,668 of these entities. This was "corrected" by Johann Weyer in 1577 to 7,405,926 demons and 72 princes. Others tried to count them also, but came up with widely differing totals. Certainly there was a belief in a whole host of demons, named and in a regular hierarchy.

Witches today do not believe in demons. Whether the accused witches of the past believed in them we do not know, yet there was no defense from accusations of association with demons leveled by the persecutors. It was said that the witches consorted with demons at their sabbats, dancing, feasting, and having sexual relations with them. Up until the twelfth century, the Church had denied the possibility of humans having sex with demons, yet such was the hysteria of the persecutions that, at the trials, evidence was submitted and admitted of just such relationships. Intercourse with demons became generally accepted in theological dogma by the fourteenth century.

There they would force themselves sexually on the victim. The demons that had intercourse with women were known as incubi; those who preyed on men were succubi. It was said that the penis of a succubus and the vagina of an incubus were ice cold, so little pleasure was to be gained from this coitus. The belief in incubi and succubi was upheld by many theologians, including St. Thomas Aquinas and St. Augustine, who identified them with the sylvans and fauns of pagan mythology. 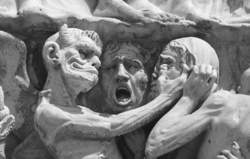 Demons and devils have become part of our collective unconscious, thus appearing not only in art and literature, but also in our dreams. (Detail of the fourteenth-century Catholic cathedral Duomo di Orvieto, Italy).

The belief that malicious entities lie behind natural disasters and other unpleasant aspects of human life is very old and is still prevalent in many traditional societies. Especially before the development of scientific discoveries that proffered more neutral explanations for the irregularities of nature, it was not unreasonable to postulate that such beings were responsible for unexplainable natural disasters and diseases. While scientific explanations have gradually supplanted metaphysical explanations, demons and devils presently survive in the mythology of Carl Jung‘s collective unconscious and in other schools of the study of the mind that interpret evil forces as projections of human fear and/or as hallucinations.

While often the two words are used interchangeably—devils from Greek diaballo (to throw across, i.e., an accuser) and demons from Greek daimon (spirit)—their meaning evolved through the centuries and within different religious contexts. Devils have always had a negative connotation as evil forces, whereas demons had more individual natures. Daimones in ancient Greece were tutelary, semi-divine spirits of either good or bad nature.

In the early days of Judaism, demons did not have a big impact on the religious belief system. During the first Diaspora, when the Jews were in contact with the dualist vision of Zoroastrianism, a more defined role for demons was developed within the tradition, in particular in the aggadah that reflected the popular rabbinic beliefs. These mythological figures drew from the indigenous pagan beliefs (such as the shedim) and are believed to be either creations of God or offspring of Lilith, the first wife of Adam. In the Cabbala during the Middle Ages, the evil forces of the Jewish tradition took definite forms, names, and roles, although they were never really fully accepted into Orthodox Judaism.

The Greek word daimon was introduced in the Roman and Hellenistic worlds to indicate evil forces, and thus entered early Christian writings with the negative connotation of impure spirits. The Judeo-Christian tradition elaborated upon the concept of the Devil as the fallen angel who tempted Adam and Eve and was forever banished from Paradise. Christian literature also drew upon the belief system of neighboring cultures in the depiction of the Apocalypse, in which demons appear that recall Jewish, Persian, and Mesopotamian myths.

In the transmission of the texts of the Scriptures the devil (in Hellenistic Greek diabolos) came to be identified with Satan (a name used in the Hebrew Bible to indicate adversary). The belief in evil powers as the source of sicknesses and problems for humans is found in all the early Christian literature, and Christian theology acknowledges evil as necessary for the fulfillment of free will. From very early, Christianity developed the practice of exorcism to expel evil spirits who had taken over control of human individuals. In medieval Europe, the belief in the existence of demons came to be associated with witchcraft and contributed to the development of the practice of exorcism and witch hunting, which faded out only after the introduction of the religious skepticism of the eighteenth-century Enlightenment.

References to demons and their association with nightmares are frequent. Christian theologians often attributed dreams or nightmares with any sexual content to the influence of Satan and his demonic minions. Macrobius was the first ancient Christian to discuss seductive demons in Christian literature. In his thesis on dreams and nightmares, he included categories of apparitions and nightmares that were not previously cover by Aristotle. This included, but was not limited to, references to the nature of incubi, succubi, and the demon Lilith. The third-century Christian theologian Tertullian portrayed them as the most common cause of nightmares in A Treatise on the Soul. He assured his readers that any sins committed while dreaming were not the fault of the dream because these types of dreams were merely the attempts of various demons to lead the faithful astray. St. Thomas Aquinas also acknowledged the direct or indirect invocations of demons in particular dreams and nightmares.

When considering the emphasis that the western Christian world placed on celibacy it becomes apparent why demons were blamed for sexual dreams. It was not common for the clergy of this period to acknowledge their internal demons. Quite often, they just redoubled their efforts on controlling and eliminating external demons.

Feedback
Flashcards & Bookmarks ?
Please log in or register to use Flashcards and Bookmarks. You can also log in with
Flashcards ?
My bookmarks ?
+ Add current page to bookmarks
Mentioned in ?
References in classic literature ?
In their fear, silence fell upon them, and a postillion, in the guise of a demon, passed in front of them, blowing, in lieu of a bugle, a huge hollow horn that gave out a horrible hoarse note.
View in context
He saw the forest god or demon rise from the vanquished foe, and placing a foot upon the still quivering carcass, raise his face to the moon and bay out a hideous cry that froze the ebbing blood in the veins of the witch-doctor.
View in context
This medicine must be short medicine, however, for the creature, god or demon, was steadily closing up the distance which had separated them.
View in context
"We heard, from one who knew him well (what should be stated in all mention of his lamentable irregularities), that with a single glass of wine his whole nature was reversed, the demon became uppermost, and, though none of the usual signs of intoxication were visible, his will was palpably insane.
View in context
But the fear that he might indeed be a devil, and that out there in the jungle behind him his fierce demons waited to do his bidding, kept M'ganwazam from putting his desires into action.
View in context
``The red fire flashes through the thick smoke!'' he exclaimed; ``the demon marches against me under the banner of his own element Foul spirit, avoid!
View in context
She needed comfort, and she knew but one comforter--the familiar demon in her bosom; but she hesitated a moment, after drawing out the black remnant, before she raised it to her lips.
View in context
As long as the demon sent to attack me only vague shadows of women who passed occasionally before my eyes in church, in the streets, in the fields, and who hardly recurred to my dreams, I easily vanquished him.
View in context
I am neither an angel nor a demon; I am a daughter of earth, I am a sister of thy faith, that is all."
View in context
The good man was coming away from dinner at the time and explains that if he had not been "heavy with eating" he would have seized the demon at all hazards.
View in context
None can tell Who did cast on thee his spell, prowling all thy life around, Leaping with a demon bound.
View in context
And as the prince sat dreaming in the Summer Garden under a lime-tree, a wicked demon had come and whispered in his car: "Rogojin has been spying upon you and watching you all the morning in a frenzy of desperation.
View in context