a method of treatment of water to reduce the concentration of dissolved salts to a level, usually 1 gram per liter (g/l), at which the water becomes suitable for drinking and household use. A shortage of fresh water exists in more than 40 countries, located mainly in arid and drought-prone areas, which account for about 60 percent of the total land surface. Calculations indicate that the shortage will reach (120–150) × 109 cu m per yr by the turn of the 21st century. It may be made up by desalinization of saline water (salt content, more than 10 g/l) or brackish water (2–10 g/l) from oceans and seas, as well as subterranean water; together they represent 98 percent of the earth’s water reserves. The shortage of fresh water may also be eliminated by delivery through pipelines or canals from areas in which it is available in excess. Water-supply canals in the USSR include the Severskii Donets-Donbas canal (about 130 km); the Irtysh-Karaganda canal (about 460 km); three sections of the Karakum Canal, which is the largest in the world; and the Ishim and Bulavinskoe aqueducts in the Kazakh SSR, each 1,700 km long. However, local desalinization of salt water is less expensive than delivery of fresh water by aqueduct, if the sources of fresh water are very remote. If consumption is up to 1,000 cu m per day, local desalinization is more advantageous than delivery of fresh water over distances of 40–50 km, and if consumption is 100,000 cu m per day, desalinization is more economical than delivery of fresh water over distances of 150–200 km.

Desalinization of water may be achieved with or without changes in the state of aggregation of the water. The distillation and freezing methods of desalinization involve changes in the physical state; methods that do not involve such changes include electrodialysis, reverse osmosis, ion exchange, extraction of water by organic solvents or in the form of water of crystallization in crystal hydrates, heating of water to a fixed temperature, ion 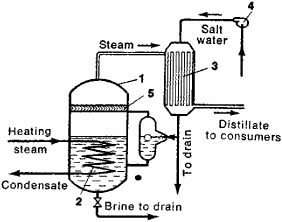 sorption on porous electrodes, and the biological method (which uses the ability of some aquatic plants to absorb salts in the light and to eliminate salts in the dark). 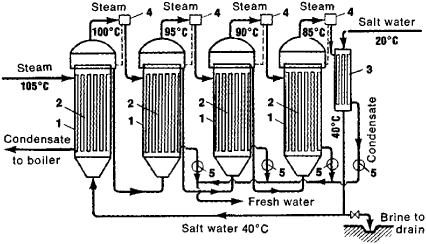 Distillation desalters may be of the single-stage type (Figure 1); the multistage type with tubular heating elements, or evaporators (Figure 2); the multistage flash-distillation type (Figure 3); or the steam-compression type. A multistage evaporator consists of a series of consecutive evaporating chambers with tubular heating elements. The heated salt water flows through the interior of the tubes of the heating element, and the steam used for heating condenses on their exterior surfaces. Heating and evaporation of water in the first stage are performed by steam from the boiler operating on the distillate. Secondary steam from the preceding evaporation chamber is used to heat each successive stage. In flash-distillation units, salt water passes successively (from last to first) through condensers that are built into the evaporation chambers. The water is thus heated by the heat of condensation and passes into the pilot boiler and is heated above the boiling point in the first evaporation chamber, where it boils. The steam then condenses on the surface of the condenser tubes, and the condensate flows down into the pan and is pumped to consumers. The unevaporated water flows through a hydroseal into the next chamber, with lower pressure, where it boils again, and so on. The heat consumption per kilogram of fresh water in a single-stage distillation desalter is about 2,400 kilojoules (kJ); heat recuperation of the phase transition in a multistage desalter makes possible a reduction in heat consumption to 250–300 kJ.

Electrodialysis desalters (Figure 4) are multichamber devices of the filter-press type. They consist of chambers bounded on one side by cation-exchange membranes and on the other side by anion-exchange membranes. The chambers are placed between a cathode and an anode, to which direct current is applied. The water being desalted enters the chambers. The electric field causes the cations of salts dissolved in the water to move toward the cathode, and the anions toward the anode. Since in an electric field cation-exchange membranes are permeable only to cations, whereas anion-exchange membranes are permeable only to anions, the salt water in the desalinization chambers is desalted, and the salts that are removed from it are concentrated in brine chambers, from which they are removed together with the salt water used for rinsing. The electric power consumption for desalinization by electrodialysis depends on the salt content of the water (2 watt-hours per liter for water containing 2.5–3.0 g/l of salts; 4–5 watt-hours per liter for water containing 5–6

Reverse osmosis desalters consist of a high-pressure pump (5–10 meganewtons per sq m, or 50–100 bar), which pumps salt water through flat or tubular membranes or through hollow fibers made from cellulose acetate or polyamide resins, which are able, under pressures exceeding the osmotic pressure, to pass water molecules but not the hydrated ions of salts dissolved in the water.

Solar desalters are used in southern desert regions and on desert islands; during the summer months they yield about 4 liters of water per day per square meter of surface receiving solar radiation.

Feedback
Flashcards & Bookmarks ?
Please log in or register to use Flashcards and Bookmarks. You can also log in with
Flashcards ?
My bookmarks ?
+ Add current page to bookmarks
Mentioned in ?
References in periodicals archive ?
"The third pillar is developing water resources through the desalinization of water from the Red Sea and the Mediterranean.
Egypt allots LE 900B plan to face water scarcity
These key segments are monitoring of water, desalinization of water, purification of water and the forth one - and more vital - is the treatment of contaminated water or wastewater.
Water Pollution: A Rising Life-Threatening Problem
Currently Pawlak and his team are working on projects related to desalinization of water combined with heavy metal removal.
A New Way To Take Radioactive Contaminants From Water
Since then he has devoted much of his time to the integration of cold-water technologies for the benefit of human settlement, meaning such seemingly diverse activities as agriculture, aquaculture, desalinization of water, air conditioning and energy development.
Our under-utilized ocean