the conversion of a latent photographic image, formed on the photosensitive layer of motion-picture and still photographic materials upon exposure to light or other radiation, into a visible image. During the development of the most common silver halide photosensitive materials, the silver ions are reduced to metallic silver under the action of a photographic developer. 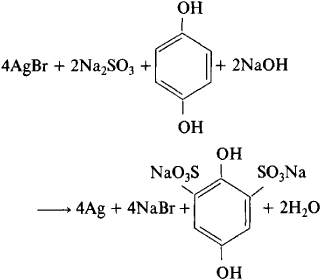 Photographic development involves some loss in a developing agent, sodium sulfite, and an alkali. At the same time, bromine ions are accumulated in the developer, thereby retarding the process. Photographic development is a selective process, whose rate is substantially higher in the exposed sections of the photosensitive layer than in the unexposed sections. This difference in rates may be explained by the presence of specks of metallic silver in the exposed emulsion grains of silver halide. The specks act as a heterogeneous catalyst for the development process. As a result, in the time that the photosensitive material remains in the developer, the emulsion grains containing these specks become fully visible, whereas the grains without specks of silver remain undeveloped.

Feedback
Flashcards & Bookmarks ?
Please log in or register to use Flashcards and Bookmarks. You can also log in with
Flashcards ?
My bookmarks ?
+ Add current page to bookmarks
Mentioned in ?
References in periodicals archive ?
The film that records the interference fringe becomes a hologram, or called holographic photo after image development, photographic fixing and other processing procedures; the second step is to reproduce the light wave information of the object by using the principle of diffraction, which is the imaging process: the holographic image is like a complex grating, and a diffracted light wave of a linearly recorded sinusoidal hologram generally gives two images under the coherent laser illumination, namely, the original image (also known as the initial image) and the conjugate image.
WIMI Hologram AR's Holographic Cloud System Turns Sci-Fi Into Reality