Baphomet (băfˈəmĕt), idol or mystical figure that the Knights Templars were accused of worshiping in the 14th cent. Apparently the name was unknown before that time in Western demonology. Its origin is disputed: it may have been a distorted form of Mahomet (Muhammad); it may have been of Greek origin.
The Columbia Electronic Encyclopedia™ Copyright © 2022, Columbia University Press. Licensed from Columbia University Press. All rights reserved. 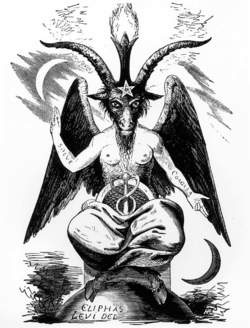