[for Sir James DewarDewar, Sir James
, 1842–1923, British chemist and physicist, b. Scotland. He was professor of chemistry (from 1877) at the Royal Institution, London, and later was director of the Davy-Faraday Research Laboratory there.
..... Click the link for more information. ], container after which the common thermos bottle is patterned. It consists of two flasks, one placed inside the other, with a vacuum between. The vacuum prevents the conduction of heat from one flask to the other. For greater efficiency the flasks are silvered to reflect heat. The substance to be kept hot or cold, e.g., liquid air, is contained in the inner flask. See low-temperature physicslow-temperature physics,
science concerned with the production and maintenance of temperatures much below normal, down to almost absolute zero, and with various phenomena that occur only at such temperatures.
..... Click the link for more information. .
The Columbia Electronic Encyclopedia™ Copyright © 2013, Columbia University Press. Licensed from Columbia University Press. All rights reserved. www.cc.columbia.edu/cu/cup/

[′dü·ər ‚flask]
(physics)
A vessel having double walls, the space between being evacuated to prevent the transfer of heat and the surfaces facing the vacuum being heat-reflective; used to hold liquid gases and to study low-temperature phenomena.
McGraw-Hill Dictionary of Scientific & Technical Terms, 6E, Copyright © 2003 by The McGraw-Hill Companies, Inc.

A vessel having double walls, the space between being evacuated and the surfaces facing the vacuum being heat reflective. It was invented in 1892 by James Dewar as a container for liquid oxygen.

Dewar's original flasks were made of glass with a coating of mirror silver; this type is still used in the laboratory. But for shipment and storage of liquid gases, metal vacuum vessels are used (see illustration). Thermos Bottle is a trademark for a Dewar vessel for hot and cold foods. 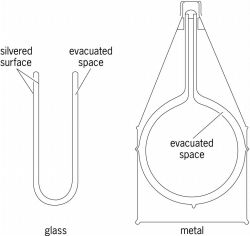