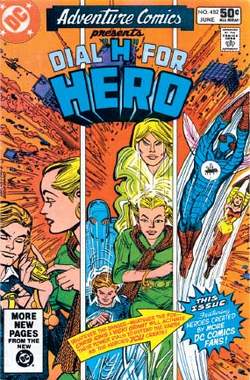 From its inception in January 1966, “Dial ‘H’ for Hero” has been one of DC Comics’ quirkiest features. In fact, it was comics’ first interactive strip. Readers were first introduced to young Robby Reed in House of Mystery #156, in a story written by Dave Wood and illustrated by Jim Mooney. Soon after moving to Littleville, bespectacled science prodigy Reed discovers a strange-looking telephone dial while exploring an underground cavern. After decoding a strange inscription on the dial, he finds that it was created by aliens and that by dialing the letters H-E-R-O he is transformed into a superhero. In fact, as the strip’s subtitle, “the boy who could change into a thousand superheroes,” made clear, Reed became a different hero each time he touched the dial.

Like many of DC’s mid-1960s features, “Dial ‘H’ for Hero” was lighthearted, breezy, and attractively drawn, but what set it apart from its competitors were the various superhero guises dreamed up by DC’s writers. These were as wonderfully diverse and bizarre a sequence of characters as the comics world has ever seen. Among other peculiar creations, fans were entertained by the likes of Daffy the Great, the Squid, King Kandy, Baron Buzz-Saw, Robby Robot, Balloon Boy, the Human Icicle, Mighty Moppet (a giant baby), and Plastic Man (who was actually the old Quality Comics hero making his DC debut). After seventeen issues, House of Mystery dumped the strip and was converted into a horror anthology. Nothing further was heard of Reed until he filled a guest slot in Plastic Man’s mid-1970s revival. This appearance starred an embittered, misanthropic Reed reduced to eking out a living as a writer, but by the end of the issue he seemed to be all right again.

In March 1981 a new “Dial ‘H’ for Hero” strip surfaced in Adventure Comics #479, shortly after being previewed in revised form in Legion of Super-Heroes #272. Uniquely for a superhero comic, it encouraged readers (including noted science fiction author Harlan Ellison) to contribute ideas for the various characters. This strip starred Christopher “Chris” King and Victoria “Vicki” Grant, high-school students from Fairfax, Virginia, who discovered an old chest in King’s attic; in the chest were a watch and a pendant, both bearing dials. It seemed that Reed had at some point dialed D-I-V-I-D-E on his original dial, thus splitting it in two. The process also split Reed into two characters: the Wizard (who was good) and the evil Master, who plagued the two teenagers until he was reunited with his good counterpart. While never quite as silly as their 1960s predecessor, King and Grant nevertheless had several enjoyably ridiculous incarnations, such as Mister Thin, Thumbelina, Hasty Pudding, Frosty, and Ragnarok the Cosmic Viking.

After Adventure Comics became a reprint title in 1982, King moved over to the pages of The New Adventures of Superboy, but Grant apparently lost interest in being a hero—though she later improbably joined a cult called the Children of the Sun, while her dial was picked up by Hero Cruz. In a series of tales throughout the 1990s in Teen Titans and Superboy & the Ravers, Cruz tackled the brainwashed Grant (who had somehow internalized her dial’s powers) before she eventually came to her senses. At some point her dial must have been donated to a museum, where it was discovered in the twenty-fifth century by one Lori Morning, who then took it with her to the thirtieth century (are you following this?) where she joined the Legion of Superheroes. In the fine tradition of the strip, her many heroic incarnations included Star-Spangled Lass, Chiller, Blip, and Blobetta.

After a somewhat fallow period, DC once more revived the concept in 2003, for the first time in its own title—now shortened to H-E-R-O. The next recipient of a magical dial was Jerry Feldon, who found it in Scoopers’ ice cream shop, where it had been left behind by a mysterious female customer. After a few issues, Jerry passed on the dial to family man Matt Allen, who passed it on to others, and it appears as if this latest series will be the most unpredictable to date. —DAR