uterus, in most female mammals, hollow muscular organ in which the fetus develops and from which it is delivered at the end of pregnancy. The human uterus is pear-shaped and about 3 in. (7.6 cm) long (it expands greatly during pregnancy); it normally lies in the pelvis, where it is supported by a ligament on either side extending to the pelvic wall. The body of the uterus tapers down to a necklike structure (cervix) that leads into the vagina. On either side of the uterus is an oviduct (called fallopian tube, or uterine tube, in humans) from 3 to 5 in. (7.6–12.7 cm) long, one end opening into the uterus and the other, wide-mouthed, ends in close proximity to an ovary. These oviducts serve as passageways for the ova to reach the uterus. Fertilization occurs in the oviduct; the fertilized ovum then continues into the uterus, where it becomes implanted in the lining of that organ, also known as the endometrium. If fertilization does not occur, the ovum and the lining of the uterine wall pass out of the body through the vagina (see menstruation). Endometrial tissues then build up again in the uterus in anticipation of the next release of an ovum.

Diseases that can affect the uterus include various sexually transmitted diseases, pelvic inflammatory disease, and endometriosis, as well as benign or malignant tumors. Benign tumors may be removed without damage to the uterus, although in cases where the tissue is found to be cancerous, the entire uterus and cervix may have to be removed in a procedure known as hysterectomy. Prolapse of the uterus occurs when weakened supporting structures allow the uterus to tilt and slip downward into the vagina. See also reproductive system. 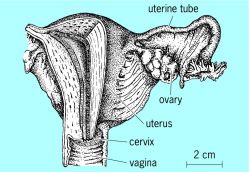