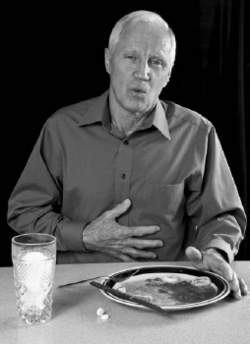 As anyone who has had indigestion can attest, food can interrupt one’s sleeping patterns. It can also influence dreams.

A common part of our folklore about dreams holds that eating certain types of foods will produce certain types of dreams. It has been said, for example, that eating spicy food before going to bed induces nightmares. Although this is unproved, if the spicy food were to induce a case of indigestion, it might disturb sleep, affecting one’s dreams.

Historically, overindulgence was associated with nightmares and “false dreams” (in the sense of proffering unreliable omens of the future). Many of the ancient writers claimed that such nightmares were demon-induced and predicted negative incidents in a person’s future. Macrobius insisted that these nightmares represented the dreamer’s present state of mind and did not relate to his or her subconscious or future. He maintained that they were of no use to the great theological issues of the time.

The early Christians believed that fasting would induce true visions. They hoped to please God through humiliation of the human body. This is reflected in both the purposeful fast of the biblical Daniel and the forced fast of Perpetua. Those who intentionally fasted for extended periods were hoping to prevent natural dreams in general; this way, they could be sure that any dreams that did occur were sent by God.

Modern research has shown that a sharp decrease in daily calories results in a decreased sexual interest while a person is awake. It also causes fewer nocturnal emissions in men and an overall decrease in the sexual themes of dreams.

The most significant finding on this topic involves the study of individuals suffering from anorexia nervosa. Anorexics sleep relatively little, and fitfully when they do sleep. Naturally, this sleep is light, with proportionally more time spent in rapid eye movement (REM) sleep (the stage most associated with dreaming) than is in a normal sleep pattern. When anorexics start to heal (and thus eat more), they sleep more and sleep more deeply.