Systems for transmitting television and other program material via satellite directly to individual homes and businesses. Direct broadcasting satellite (DBS) systems operate at microwave frequencies, in a portion of the Ku band; in North and South America these systems operate in the frequency range 12.2–12.7 GHz.

DBS systems use a satellite in geostationary orbit to receive television signals sent up from the Earth's surface, amplify them, and transmit them back down to the surface. The satellite also shifts the signal frequency, so that a signal sent up to the satellite in the 17.3–17.8-GHz uplink band is transmitted back down in the 12.2–12.7-GHz downlink band. The downlink signal is picked up by a receive antenna located atop an individual home or office; these antennas are usually in the form of a parabolic dish, but flat square phased-array antennas are sometimes used, and may eventually become commonplace. The receive antenna may be permanently pointed at the satellite, which is at a fixed point in the sky, in a geostationary orbit. See Antenna (electromagnetism)

It is difficult to build receivers to operate at the microwave downlink frequencies, so the signal from the dish antenna is first passed to a downconverter, usually mounted outdoors on the antenna, that shifts it to (typically) the 0.95–1.45-GHz band. This signal is then conducted by cable to the receiver atop the television set. The receiver contains the channel selector, as well as a decoder to permit the user to view authorized channels. The receiver is connected by an additional cable to the television set (see illustration). 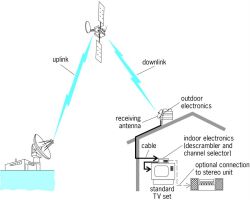 A typical direct broadcasting satellite contains 16 transponders, or amplifiers, the maximum permitted under present regulations, each with a radio-frequency power output in the range 120–240 W. Two or more direct broadcasting satellites may be located at any of the orbital locations assigned to the United States, for a maximum of 32 transponders.

DBS satellites in the United States typically use digital signals; a single 24-MHz satellite transponder can carry an error-corrected digital signal of 30 megabits per second or greater. A wide variety of communications services can be converted to digital form and carried as part of this digital signal, including television, high-definition television (HDTV), stereo audio, one-way videoconference, information services (such as news retrieval services), and digital data.

Modern digital signal compression technology greatly increases the capacity of a satellite transponder. It is possible to compress up to perhaps 10 television signals into the bandwidth of a DBS transponder, depending on the amount of motion in the picture and the amount of screen resolution required. Since some common programming (for example, sports) contains a good deal of motion, the average compression factor for a DBS system will typically be lower than 10. See Data compression

DBS systems, like all satellite systems operating in the Ku band, are subject to attenuation of their signals by rain. The combination of satellite power and receive-dish antenna size is chosen to enable reception for all but the heaviest rainfall periods of the year, corresponding to an outage period of perhaps 7 h per year at any particular location. The DBS customer can further reduce this expected outage period by purchasing a slightly larger dish antenna. See Television