an electric rotating machine that converts mechanical energy to DC electrical energy (a generator), or vice versa (a motor). It is reversible—that is, the same machine can operate both as a generator and as a motor. For example, traction motors of rolling stock and servomotors of high-power DC electric drives operate in this way.

The operation of a generator is based on the phenomenon of electromagnetic induction. If a coil made of a conducting material is rotated in a constant magnetic field (Figure 1), an alternating electromotive force (emf) will appear in the coil. The emf has the frequency f = PΩ/2π, where ρ is the number of pairs of poles in the electromagnetic system and Ω is the angular velocity. A rotating commutator is used to convert the alternating 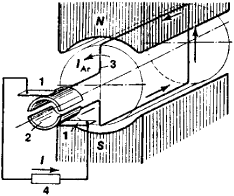 Figure 1. Schematic of the operation of a DC machine: (N) and (S) poles of a permanent magnet, (I) load current, (IAr) armature current, (1) brushes, (2) commutator segment, (3) coil of a conductor mounted on the armature of the machine, (4) load

The operation of a motor is based on the interaction between the current-carrying conductors and the magnetic field. This interaction gives rise to an electromagnetic torque.

The working parts of a DC machine are the magnetic cores, the windings of the stator and the rotor (armature), and the commutator (Figure 2). The stator’s magnetic core consists of a steel frame, main poles made up of sheet-steel laminations, and solid commutating poles. The field winding is mounted on the main poles. A winding that is connected in series with the armature winding is placed on the commutating poles. The armature core is also laminated; the armature winding is located in slots in the core. The structural components of a DC machine include a shaft, bearings, end bells, a current-collecting assembly, and a fan. The field winding establishes the main magnetic field. When the armature winding is connected to the external circuit, a current passes through this winding and produces the magnetic field of the armature. The armature field causes the flux in the gap between the stator and the rotor to be less than under no-load conditions (when the circuit is disconnected). The demagnetizing effect of the armature field is due to the saturation and increased reluctance of the pole shoes.

In operating DC machines, sparking may occur under the brushes during commutation. When a section of the armature winding passes from a zone of one polarity (for example, N) to a zone of the opposite polarity (S), the direction of current flow in this section is reversed. For this reason, a reactive emf is induced in the section that is short-circuited by a brush. The emf is the sum of the emf of self-induction resulting from the current change and of the emf of mutual induction (if several sections are commutated simultaneously). In addition, a rotational emf appears in the section that is being commutated; this emf is caused by the displacement of the section in the armature field, which attains its maximum magnitude in the commutating zone. These emf s result in a slowing of current changes, in an increased current density under the trailing edge of the brush, and in sparking under the brushes. Commutating poles are used to compensate for the reactive emf in the section that is being commutated; they change the direction of the armature field in the commuting zone. The presence of the commutator and brush assembly complicates construction and is responsible for the high cost and relatively low reliability of DC machines.

The first practical DC motor was built by B. S. Iakobi (Jacobi) in 1838. The motor was fed from a battery of galvanic cells and was used to drive the propeller shaft of a boat. The first DC generator was also constructed by Iakobi (1842). At first, permanent magnets were used in DC machines. The use of electromagnets represented a substantial improvement. In 1859, A. Pacinotti invented an electric motor with a ring armature; the design of the ring armature was improved by Z. T. Gramme in 1869. Widespread use of DC machines began in the 1870’s, when F. von Hefner-Alteneck replaced the ring armature with the drum armature. This change simplified the construction of DC machines and doubled the machines’ capacity. DC machines have remained in this form with practically no changes. Improvements have involved mainly the use of better insulating and structural materials, the use of more advanced technology, the development of exact methods for design calculations, and the optimization of dimensions.

DC machines were developed and used by industry earlier than the AC machines. They lost their dominant position, however, after the invention of the three-phase current system by M. O. Dolivo-Dobrovol’skii in 1889. DC machines came to be used only in certain areas, where the regulation of motor speed over a wide range was necessary. DC generators were used as exciters for synchronous machines, as welding generators, and in motor-generator systems. DC motors were used, for example, in electric drives in transport and in high-power rolling mills in metallurgy. Since the 1950’s, however, the applications of DC machines have again increased. Medium-power DC machines are used as amplidynes. Microelectric machines are used in automatic control systems and in household electric appliances. DC motors of this kind are superior to AC motors in that they have better characteristics, a greater range of speed adjustment, and a greater precision of adjustment. At the same time, DC machines are losing their importance as exciters of synchronous machines and are being supplanted by ionic and semiconductor excitation systems.

In the USSR, several series of DC machines have been developed that fully satisfy the needs for such electric machines. The earlier developed series P is being replaced in the 1970’s by the new series 2P. Series P has a power range of 0.3 to 1,400 kilowatts and operates at voltages of 110/220/440 volts; the characteristics of series 2P meet the current requirements of power engineering. In addition to these standard machines, there is also a large variety of specialized DC machines, such as amplidynes, welding generators, generators for galvanic and electrolytic processes, and homopolar machines. The microelectric machines used in household appliances are also of varied design and performance.