[də¦rekt ¦kə·rənt ′mōd·ər]
(electricity)
An electric rotating machine energized by direct current and used to convert electric energy to mechanical energy.
McGraw-Hill Dictionary of Scientific & Technical Terms, 6E, Copyright © 2003 by The McGraw-Hill Companies, Inc.
The following article is from The Great Soviet Encyclopedia (1979). It might be outdated or ideologically biased.

a DC machine that operates as a motor. DC motors cost more and require greater expenditures on maintenance than AC motors. They permit, however, smooth and economical speed control within wide limits. For this reason, they have found broad application in, for example, rail and railless electrified transport, cranes, rolling mills, and automation equipment. 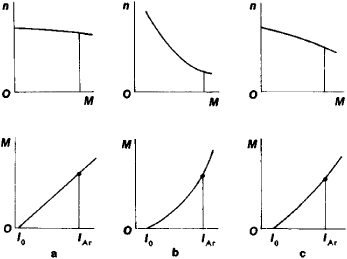 Shunt motors have a speed range of approximately three to one. A rheostat in the field circuit is the most convenient and inexpensive means for adjusting the speed of such machines. The speed can be increased or decreased with the efficiency remaining sufficiently high at all speeds.

In series motors, the speed can be decreased by a rheostat in the armature circuit and increased by connecting a shunt resistance in parallel with the field winding. The losses in the rheostat inserted in the armature circuit lower the efficiency substantially. Shunting the field winding does not change the efficiency substantially.

In the USSR DC motors are manufactured in standard series. For example, series DK features power ratings of 40 to 110 kilowatts (kW) at voltages of 250, 350, and 750 volts (V); speed can be varied from 0 to 4,000 rpm. This series is used for electrified urban transport systems. Series D has power ratings of 2.5 to 185 kW at voltages of 220 and 440 V and a speed range of three to one. Series D is used, for example, in drives for high-power rolling mills and for all types of cranes. Electric drives that use DC microelectric motors are widely used in automatic control systems and in electric household appliances. The main advantage of such motors over AC motors is a considerably greater range and precision of speed control.

An electric rotating machine energized by direct current and used to convert electric energy to mechanical energy. It is characterized by its relative ease of speed control and, in the case of the series-connected motor, by an ability to produce large torque under load without taking excessive current. See Electric rotating machinery

The principal parts of a dc motor are the frame, the armature, the field poles and windings, and the commutator and brush assemblies. The frame consists of a steel yoke of open cylindrical shape mounted on a base. Salient field poles of sheet-steel laminations are fastened to the inside of the yoke. Field windings placed on the field poles are interconnected to form the complete field winding circuit. The armature consists of a cylindrical core of sheet-steel disks punched with peripheral slots, air ducts, and shaft hole. These punchings are aligned on a steel shaft on which is also mounted the commutator. The commutator, made of hard-drawn copper segments, is insulated from the shaft. Segments are insulated from each other by mica. Stationary carbon brushes in brush holders make contact with commutator segments. Copper conductors placed in the insulated armature slots are interconnected to form a reentrant lap or wave style of winding. See Commutation, Windings in electric machinery

Rotation of a dc motor is produced by an electromagnetic force exerted upon current-carrying conductors in a magnetic field. For basic principles of motor action See Motor.

Direct-current motors may be categorized as shunt, series, compound, or separately excited.

The field circuit and the armature circuit of a dc shunt motor are connected in parallel. The field windings consist of many turns of fine wire. The entire field resistance, including a series-connected field rheostat, is relatively large. The field current and pole flux are essentially constant and independent of the armature requirements. The torque is therefore essentially proportional to the armature current. Typical applications are for load conditions of fairly constant speed, such as machine tools, blowers, centrifugal pumps, fans, conveyors, wood- and metal-working machines, steel, paper, and cement mills, and coal or coke plant drives.

A compound motor has two separate field windings. One, generally the predominant field, is connected in parallel with the armature circuit; the other is connected in series with the armature circuit. The field windings may be connected in long or short shunt without radically changing the operation of the motor. They may also be cumulative or differential in compounding action. With both field windings, this motor combines the effects of the shunt and series types to an extent dependent upon the degree of compounding. Applications of this motor are to loads requiring high starting torques and somewhat variable speeds, such as pulsating loads, shears, bending rolls, plunger pumps, conveyors, elevators, and crushers. See Direct-current generator

The field winding of a separately excited motor is energized from a source different from that of the armature winding. The field winding may be of either the shunt or series type, and adjustment of the applied voltage sources produces a wide range of speed and torque characteristics. Small dc motors may have permanent-magnet fields with armature excitation only. Such motors are used with fans, blowers, rapid-transfer switches, electromechanical activators, and programming devices.

Feedback
Flashcards & Bookmarks ?
Please log in or register to use Flashcards and Bookmarks. You can also log in with
Flashcards ?
My bookmarks ?
+ Add current page to bookmarks
Mentioned in ?
References in periodicals archive ?
In Interroll's system, the direct-current motor is enclosed in the power-roller housing.
Regulating output of motion control systems
The high quality, miniature, direct-current motors are mounted inside lightweight rigid tubes of carbon fibre.
THE BIONIC AGE; Now we have the technology to let the blind see, the deaf hear ... and have babies born outside the womb
Direct-current motors drive the chair in both altitude and azimuth at fast and slow speeds.
Voyager: a motorized binocular chair
A Vermont county extension service agent contacted the Rural Information Center when a handicapped small-business client, seeking a USDA Small Business Innovation Research (SBIR) grant, needed the names of electrical contractors who built small variable-speed direct-current motors the businessman needed for his specialized wheel chair invention.
The Rural Information Center assists local communities
Direct-current motors have been popular since they displaced steam engines as a source of train propulsion in the 1940s.
Making tracks with alternating current