a set of points in the xy-plane such that at each point a certain direction is defined. The direction is usually represented by an arrow passing through the point.

If the equation yʹ = f(x, y) is given, then at each point (x0, y0) of some region in the xy-plane the value of the slope k = f (x0, y0) of the tangent to the integral curve passing through this point is known, so that the direction of the tangent can be represented by an arrow. Thus the differential equation defines a direction field; conversely, a direction field in some region of the xy-plane defines a differential equation of the form yʹ = f(x, y). By sketching sufficiently many isoclines (curves joining points at which the direction field f (x, y) = C, C a constant, has the same value), we can obtain approximations to the integral curves, that is, curves having the prescribed directions as tangents (the isocline method). 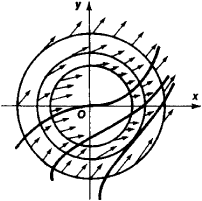 Feedback
Flashcards & Bookmarks ?
Please log in or register to use Flashcards and Bookmarks. You can also log in with
Flashcards ?
My bookmarks ?
+ Add current page to bookmarks
Mentioned in ?
References in periodicals archive ?
Caption: Figure 3: Experimental results: (a) gray image of the horizontal specimen; (b) y direction field of the horizontal specimen; (c) gray image of vertical specimen; (d) y direction displacement field of the vertical specimen.
Effect of molecular chain structure on fracture mechanical properties of aeronautical polymethyl methacrylate using extended digital image correlation method
Order movement of rails and poles as direction field supposed to follow too obvious.
The pipes, the pipes are calling - and I can't resist
Still maintaining the direction field boundaries are on the right then left.
Pastimes: Another diamond walk; Rambling
Figure 6 shows the direction field, the initial value, the solution, the first guess at a bounding box, and then finally the smaller sub-region required by the solution.
Fundamentals and Modern Technology Working Together