[kən¦tin·yə·wəs ′fəŋk·shən]
(mathematics)
A function which is continuous at each point of its domain. Also known as continuous transformation.
McGraw-Hill Dictionary of Scientific & Technical Terms, 6E, Copyright © 2003 by The McGraw-Hill Companies, Inc.
The following article is from The Great Soviet Encyclopedia (1979). It might be outdated or ideologically biased. 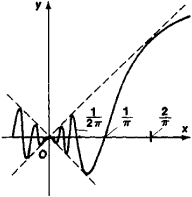 Feedback
Flashcards & Bookmarks ?
Please log in or register to use Flashcards and Bookmarks. You can also log in with
Flashcards ?
My bookmarks ?
+ Add current page to bookmarks
Mentioned in ?
References in periodicals archive ?
In [21], an algorithm (EDAS-3) to approximate the jump discontinuity set of functions defined on subsets of R based in these methods was proposed.
The present paper shows an accurate algorithm (DA3DED) that can obtain a point based representation of the jump discontinuity set of a 3D image.
A Doubly Adaptive Algorithm for Edge Detection in 3D Images
where [S.sub.i] is the true mean discontinuity spacing for each discontinuity set, for i = 1, 2, ..., n.
Additionally the orientations of discontinuities have been evaluated by plotting the dips and dip directions of discontinuity planes on the lower hemispherical projection (LHP) and the numbers and orientation of discontinuity sets were determined from the LHP analysis of the discontinuities for each limestone quarry.
Block volume estimation from the discontinuity spacing measurements of Mesozoic limestone quarries, Karaburun Peninsula, Turkey
If the function f(x) undergoes discontinuities on a smooth surface S, governed by a scalar equation s(x) = 0, then the discontinuity set S separates x space into domains [G.sup.-] = {x [member of] [R.sup.n] : s(x) < 0} and [G.sup.+] = {x [member of] [R.sup.n] : s(x) > 0}, and the Filippov set [PHI](x) is a linear segment joining the endpoints of the vectors
Nonlinear [L.sub.2]-Gain Analysis of Hybrid Systems in the Presence of Sliding Modes and Impacts
In the current study, the condition factor (TQ for a discontinuity set was calculated using the equation by Hack et al.
The assessment of slope stability and rock excavatability in a limestone quarry
The rock has two discontinuity sets, one of which is the bedding plane.
Correction of Line-Sampling Bias of Rock Discontinuity Orientations Using a Modified Terzaghi Method
The kinematic analyses of the discontinuity sets revealed the possibility of both wedge and planar failures.
Clasificacion de taludes de corte en sustratos rocosos metasedimentarios meteorizados
This analysis is entirely qualitative in nature and is based on representative orientation values of tight data clusters, uniform slope angle and orientation, uniform friction angle, even spatial distributions of discontinuities, unbiased values of discontinuity sets and lack of cohesion along discontinuity surfaces (Admassu and Shakoor, 2013).
SLOPE STABILITY ANALYSIS OF DANDOT PLATEAU, PUNJAB PAKISTAN
Here are some real-life examples of when philosophical discontinuity sets in--and the resulting consequences.
On the same page. (Business Management)
Four dominant discontinuity sets were identified on the left (area 1) and right (area 1 and 2) abutments of the proposed dam site (Tables 1 and 2).
An engineering geological appraisal of the Chamshir dam foundation using DMR classification and kinematic analysis, southwest of Iran