Also found in: Dictionary, Thesaurus, Medical.
Related to Dislocations: edge dislocation, fractures, sprains
The following article is from The Great Soviet Encyclopedia (1979). It might be outdated or ideologically biased.

(in crystals), crystal defects; lines along which and in the vicinity of which the regular arrangement of the atomic planes characteristic for the crystal is disrupted. Dislocations and other crystal defects determine many physical properties of crystals; such properties are called structurally sensitive properties. In particular, the mechanical properties of crystals—strength and plasticity—are caused by the existence of dislocations and by their special features.

The formation of edge dislocations may be imagined by cutting the crystal along part of the plane ABCD (Figure 1 ,b), 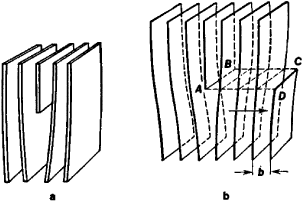 Figure 1. Edge dislocation: (a) Disruption of the atomic plane within the crystal, (b) diagram of the formation of an edge dislocation

displacing the lower part with respect to the upper part by one atomic distance b in the direction perpendicular to AB, and then again joining the atoms at the opposite sides of the cut. The remaining extra plane terminates along the edge dislocation AB. The vector b, whose magnitude is equal to the interatomic distance, is called the characteristic slip vector (the Burgers vector). The plane passing through the slip vector and the line of dislocation is called the glide plane for the edge dislocation.

If the slip direction b is parallel rather than perpendicular to the boundary AB of the cut, a screw dislocation results (Figure 2,a). In contrast to the edge dislocation, the glide plane for a screw dislocation may be any crystallographic plane passing through the line AB. A crystal with a screw dislocation no longer consists of parallel atomic planes but should be regarded as consisting of a single atomic plane twisted into the shape of a helicoid, or spiral staircase without steps (Figure 2,b). Figure 2,c shows the arrangement of atoms above (open circles) and below (solid circles) the glide plane in a simple cubic lattice with a screw dislocation. If the screw dislocation emerges at the external surface of the crystal, then the step AD, one atomic layer in height, is terminated at the point of emergence A (Figure 2,b). This step plays an active role during the crystallization process. Atoms of material precipitating from the vapor phase or solution readily add to the step at the surface of the growing crystal. The number of atoms included in the step and the rate of displacement of the step at the crystal surface are greater in the area of the emergence of the dislocation; therefore, the step is twisted about the axis of the dislocation. The step gradually rises from one crystal “level” to another, which leads to the spiral growth of the crystal.

The magnitude of the elastic energy caused by the dislocation stress field is proportional to b2 and is usually ~ 10−4 erg per cm of dislocation length.

Figure 5. Climb of an edge dislocation. Atoms of the extra plane migrate to the vacant lattice points.

Mobility of dislocations. Glide of dislocations is resisted not only by the strength of the interatomic bonds that are being broken but also by the scattering of the thermal oscillations of atoms and conduction electrons (in metals) in the elastically distorted region of the crystal surrounding the moving dislocation, by elastic interaction with other dislocations and with atoms of impurity elements in solid solutions, by grain boundaries in polycrystals, and by particles of another phase in separating alloys (twins). Part of the work of external forces is expended on overcoming these obstacles; as a result, the fewer defects the crystal contains, the greater the dependence of the mobility of dislocations on the lattice structure. The rate of dislocation glide increases sharply with stress but does not exceed the speed of propagation of sound in the crystal. The rate of climb is proportional to the stress. 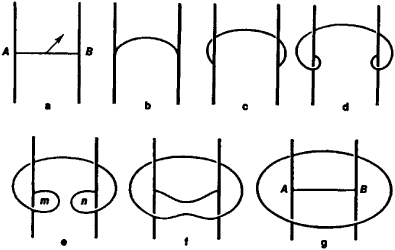 Figure 6. Diagram of a Frank-Read dislocation source. A section of the dislocation is fixed at points A and B. The section is bent under the influence of the external force (arrow) and successively assumes configurations (a) through (g) until the closed dislocation loop is separated, with the regeneration of the initial section AB. The attracting regions m and n of the loop undergo annihilation at stage (f).

Attracting dislocations with opposing glide vectors, located in the same glide plane, annihilate each other on approach (Figure 3,b, c, d). If such dislocations are located in different glide planes, climb is required for their annihilation. For this reason, high-temperature annealing, which favors climb, lowers the density of dislocations.

Dislocations as a source of lattice curvature. Crystal regions separated by rows of dislocations (Figure 7) or by dislocation

networks have a different orientation of the atomic planes and are called crystalline blocks (grains). If dislocations are uniformly distributed throughout the crystal volume, the block structure does not exist, but the lattice is curved (Figure 8).

Dislocation structure of deformed crystals. Fracture. The distribution of dislocations in deformed crystals is usually nonuniform. At a low degree of deformation (usually up to 10 percent), dislocations are frequently located along selected glide planes. An increase in deformation generates (usually in metals) a block structure, which may be detected with an electron microscope or by X-ray scattering. The size of the blocks decreases with increasing deformation. Multiplication of the dislocations decreases the mean distances between dislocations, their elastic stress fields overlap, and glide is made more difficult (work hardening of crystals). To continue the slippage, the externally applied stress must be increased.

Upon further multiplication of dislocations, the internal stresses may attain values approaching the theoretical strength. In this case, fracture of the crystal takes place through the nucleation and propagation of microscopic cracks. Destruction may also be facilitated by thermal oscillations.

irregularities in the shapes of the initial bedding of rock caused by tectonic movements of the earth’s crust, magmatic activity, metamorphism, and exogenous processes such as glacial movement, landslides, karst, and river erosion. Dislocations are usually subdivided into plicate and rupture (disjunctive) dislocations, and sometimes injection dislocations are also distinguished.

Feedback
Flashcards & Bookmarks ?
Please log in or register to use Flashcards and Bookmarks. You can also log in with
Flashcards ?
My bookmarks ?
+ Add current page to bookmarks
Mentioned in ?
References in periodicals archive ?
The grooved defect of the humeral head: a frequently unrecognized complication of dislocations of the shoulder joint.
Epidemiology of shoulder dislocations presenting to emergency departments in the United States.
First-Time Traumatic Anterior Shoulder Instability: Management in the Young and Active Patient
A total of 537 (92.4%) patients had anterior, 32 (5.5%) patients had posterior, and 12 (2.1%) patients had inferior dislocations. In addition, bilateral shoulder dislocation was observed in 12 (2.1%) patients, and superior dislocation in none.
Reduction of dislocations was performed by FAD rotation in 183 patients, Cunningham in 164 patients, and both methods in 177 patients.
Evaluation of Patients Presenting to the Emergency Service with Shoulder Dislocation
Osteochondral fracture may occur at the time of patellar dislocation or reduction and usually follows the impact between the medial facet of the patella [Figure 1]a and the lateral facet of the lateral femoral condyle [Figure 1]b.
We hypothesized that the fixation of osteochondral fracture in adolescent patients with patellar dislocation was not necessary when the fracture did not involve the bearing surface of the knee.
Fixation versus Excision of Osteochondral Fractures after Patellar Dislocations in Adolescent Patients: A Retrospective Cohort Study
Indoor and outdoor patients presenting with history of or clinical features of patellar dislocation.
EVALUATION OF CLINICAL OUTCOME OF MEDIAL PATELLOFEMORAL LIGAMENT RECONSTRUCTION IN PATIENTS WITH RECURRENT PATELLAR INSTABILITY
Management of chronic recurrent temporomandibular joint dislocations: a retrospective study.
MANAGEMENT OF TEMPOROMANDIBULAR JOINT DISLOCATION AT MAYO HOSPITAL LAHORE
A computed tomography (CT) scan with IV contrast of the chest demonstrated posterior and superior dislocation of the right clavicular head.
CASE REPORT
Two types of dislocations are considered in this paper: screw dislocations (see Fig.
Bosons and Fermions as Dislocations and Disclinations in the Spacetime Continuum
The direction of dislocation may vary depending on the traumatic force vector, and includes anterior, anterolateral, lateral, and posterior dislocations.
Traumatic Lumbosacral Dislocation: Current Concepts in Diagnosis and Management
The Quebec Shoulder Dislocation Rule (QSDR) is a clinical decision rule to allow selective use of pre-reduction radiography in shoulder dislocation (5).
Implementation of Quebec Shoulder Dislocation Rule in Turkish Patient Population