[dis′plās·mənt ‚pəmp]
(mechanical engineering)
A pump that develops its action through the alternate filling and emptying of an enclosed volume as in a piston-cylinder construction.
McGraw-Hill Dictionary of Scientific & Technical Terms, 6E, Copyright © 2003 by The McGraw-Hill Companies, Inc.
The following article is from The Great Soviet Encyclopedia (1979). It might be outdated or ideologically biased.

a periodicaction device used to move liquids by displacing them through the pressure exerted by another medium. There are several types of displacement pumps.

The monte-jus, or automatic displacement elevator, consists of a tank fitted with four valves to which pipes are connected. During operation, the liquid is expelled from the tank by compressed air and is thus forced into a higher tank. The first tank then fills with liquid, and the cycle is repeated. This type of displacement pump is used in the food industry, in devices for recovering lubricating oil, and to lift liquids to great heights (up to 300 m).

The pulsometer (see Figure 1) has two chambers, A1, and A2, to which a valve box with inlet and delivery valves is attached, and a steam-distribution chamber B. The processes of intake and exhaust occur successively in the chambers. Intake occurs as a result of the difference between the pressure in the chamber and atmospheric pressure. The advantage of pulsometers is their ease of construction, installation, and servicing; their disadvantage is their high relative steam consumption. Pulsometers were widely used in temporary installations in the construction industry and agriculture to draw water up to heights of 7-8 m and to force it to heights of up to 50 m. 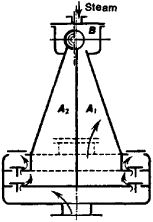 Figure 1. Diagram of a pulsometer: (A1, and A2) working chambers, (B) steam-distribution chamber

So-called Humphrey pumps, in which water is displaced by pressure resulting from the combustion of a gas (either natural gas or gas produced in gas generators), are also in the category of displacement pumps. They were used to draw off large amounts of water and to lift them to small heights, as, for example, in the irrigation and drainage of fields in agriculture. They have now been replaced by more powerful modern pumps.

A pump that develops its action through the alternate filling and emptying of an enclosed volume. There are five basic types: reciprocating, direct-acting steam, rotary, vacuum, and air-lift.

Positive-displacement reciprocating pumps have cylinders and plungers or pistons with an inlet valve, which opens the cylinder to the inlet pipe during the suction stroke, and an outlet valve, which opens to the discharge pipe during the discharge stroke. Reciprocating pumps may be power-driven through a crank and connecting rod or equivalent mechanism, or direct-acting, driven by steam or compressed air or gas. Power-driven reciprocating pumps are highly efficient over a wide range of discharge pressures. Except for some special designs with continuously variable stroke, reciprocating power pumps deliver essentially constant capacity over their entire pressure range when driven at constant speed.

A reciprocating pump is readily driven by a reciprocating engine; a steam or power piston at one end connects directly to a fluid piston or plunger at the other end. Steam pumps can be built for a wide range of pressure and capacity by varying the relative size of the steam piston and the liquid piston or plunger. The delivery of a steam pump may be varied at will from zero to maximum simply by throttling the motive steam, either manually or by automatic control. Reciprocating pumps are used for low to medium capacities and medium to highest pressures. They are useful for low- to medium-viscosity fluids, or high-viscosity fluids at materially reduced speeds. Specially fitted reciprocating pumps are used to pump fluids containing the more abrasive solids.

Another form of displacement pump consists of a fixed casing containing gears, cams, screws, vanes, plungers, or similar elements actuated by rotation of the drive shaft. Most forms of rotary pumps are valveless and develop an almost steady flow rather than the pulsating flow of a reciprocating pump.

Although vacuum pumps actually function as compressors, displacement pumps are used for certain vacuum pump applications. Simplex steam pumps with submerged piston pattern fluid ends are used as wet vacuum pumps in steam heating and condensing systems. Sufficient liquid remains in the cylinder to fill the clearance volume and drive the air or gas out ahead of the liquid. See Vacuum pump

In handling abrasive or corrosive waters or sludges, where low efficiency is of secondary importance, air-lift pumps are used. The pump consists of a drop pipe in a well with its lower end submerged and a second pipe which introduces compressed air near the bottom of the drop pipe. The mixture of air and water in the drop pipe is lighter than the water surrounding the pipe. As a result, the mixture of air and water is forced to the surface by the pressure of submergence. See Compressor, Pump