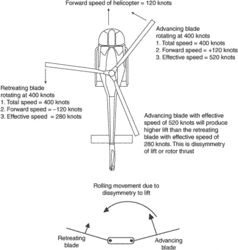 During the movement of a helicopter rotating blade, the speed of airflow over the advancing blade is higher than the retreating blade, resulting in production of an unequal amount of lift. This is called a dissymmetry of lift. To correct this aerodynamic imbalance, the blades are allowed to perform a series of controlled movements to produce equal amounts of lift. This process of equalization is called flapping to equality. See also dissymmetry of lift.
An Illustrated Dictionary of Aviation Copyright © 2005 by The McGraw-Hill Companies, Inc. All rights reserved

Feedback
Flashcards & Bookmarks ?
Please log in or register to use Flashcards and Bookmarks. You can also log in with
Flashcards ?
My bookmarks ?
+ Add current page to bookmarks
Mentioned in ?
References in periodicals archive ?
It also reduces the dissymmetry of lift due to rotors moving in opposite directions, it increases payload for the same engine power and reduces the noise.
Ruling the Skies