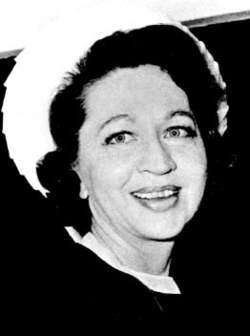 Jeane Dixon, one of the best-known American astrologers and psychics of the twentieth century. Courtesy Fortean Picture Library.

Jeane (Pinkert) Dixon was one of the best known, albeit controversial, psychics of recent times. It was her possible prediction of the death of President John F. Kennedy that catapulted her into the national limelight.

Jeane was born to a wealthy lumber family in Medford, Wisconsin on January 3, 1918. At the age of eight, she had her fortune told by a Gypsy who said that she would become a famous seer. The family moved to California when she was still young. Jeane attended high school in Los Angeles and took acting and singing lessons.

In 1939, at the age of twenty-one, she married James L. Dixon, an automobile dealer. They moved to Detroit, Michigan and started a real estate business. The couple moved to Washington, DC, and continued in real estate. Working with the Home Hospitality Committee, a Washington socialite organization, Dixon entertained servicemen by making predictions. A devout Roman Catholic, Dixon saw no problem with giving predictions, saying, “A revelation is something special. Sometimes two, three, or even four years go by without God granting me a revelation, and then some mornings I wake up and feel inspired and know that something great is going to happen…. Another but a less certain way through which I receive knowledge of future events is what I call the ‘psychic way.’ Often when I meet people and shake their hands, I feel vibrations. But sensing and interpreting these vibrations, I can tell many things about that person. I ’see’ even more if I have a chance to touch their hands with the tip of my right hand. My fingers are supersensitive, and many times a gentle touch enables me to pick up an individual channel of communication with eternity.” She claimed she could see the past, present, and future.

Jeane attracted much public attention after she claimed to have predicted the death of President Kennedy. Ruth Montgomery was a newspaper political columnist who wrote the book A Gift of Prophesy: the Phenomenal Jean Dixon (1965). The book sold more than three million copies and launched Dixon on the lecture circuit. But the basis of the book left many in doubt. Many of Jeane’s predictions were called into question and debated in the national press.

A 1956 article in Parade magazine stated, “As for the 1960 election, Mrs. Dixon thinks it will be dominated by labor and won by a Democrat. But he will be assassinated or die in office.” However, Dixon also said that the occurrence would “not necessarily (be) in his first term.” At another time she made the statement that “During the 1960 election, I saw Richard Nixon as the winner.” At that time, she went on to add that “John F. Kennedy would fail to win the Presidency.” She also predicted that World War III would start in 1958, that there would be a cure for cancer found in 1967, and that the Russians would put the first man on the moon. In 1956, she said that Indian Prime Minister Nehru would be ousted from office, yet he served until his death in 1964. She also said that Fidel Castro would be overthrown. In the July, 1995, issue of the Star, Dixon said, “A stunning outcome to the O.J. Simpson trial will be a result no one predicted. I can see that O.J. will walk.” She was correct on that—but she could just as easily claim success if Simpson had been found guilty or the jury had failed to reach a decision. “A guilty verdict or hung jury will keep O.J. Simpson in jail through most of this year,” she predicted in the January 17, 1995 issue of the Star. “I don’t see him walking away a free man until an appeal,” was her prediction in the April 25, 1995, issue of the tabloid.

However, Dixon did make some very dramatic accurate predictions. She warned Carole Lombard not to travel by air just a few days before the actress died in a plane crash. She similarly predicted the death of Dag Hammarskjöld, also in a plane crash. But most of her predictions were couched in such a way that she could claim to have been right no matter what happened.