(dōdō`nə), in Greek religion, the oldest oracleoracle,
in Greek religion, priest or priestess who imparted the response of a god to a human questioner. The word is also used to refer to the response itself and to the shrine of a god. Every oracular shrine had a fixed method of divination.
..... Click the link for more information. , in inland Epirus, near modern Janina, sacred to Zeus and Dione. According to Herodotus, an old oak tree there became an oracle when a black dove, from Egyptian Thebes, settled on it. Priestesses interpreted the rustling of the tree's leaves, the cooing of doves, and the clanging of brass vessels that were hung from the tree's branches. The site was extensively excavated in the 20th cent.
The Columbia Electronic Encyclopedia™ Copyright © 2013, Columbia University Press. Licensed from Columbia University Press. All rights reserved. www.cc.columbia.edu/cu/cup/ 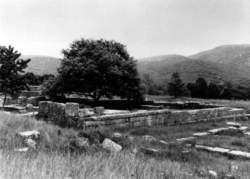 Ruins of Greek temples are all that remain of a once thriving religious site, where Zeus and his wife were worshipped. In one myth, too, an Egyptian priestess escaped the Phoenicians as a dove and landed on a tree that would become the location of an important oracle. Fortean Picture Library.

The most important object at Dodona was a tree, variously noted to be beech or oak. The two deities were believed to reside in this sacred tree. Those who sought an oracle would approach the priests (or, in later times, the priestesses) andmake their inquiry. The priests would then listen to the rustling of the leaves through which the Gods were believed to speak.

There are two famous stories about Dodona. Herodotus (c. 484-c. 425 BCE), the one who noted the transition of male to female personnel at the oracle, repeated a legend that the site originated in the plight of two Egyptian priestesses who had been abducted by the Phoenicians. They escaped their captors by turning themselves into doves and flying away. One flew to Dodona, landed on a tree, and demanded the founding of an oracle. The other flew to Libya where a similar event is said to have occurred (though no Libyan oracle existed to verify the report). It was also noted that the prow on the ship of Jason the Argonaut was believed to have been carved from wood from Dodona.

There were no buildings at Dodona for many centuries, but around the fourth century BCE a temple to Zeus was erected. In the next century, King Pyrrhus of Epirote became the oracle’s patron and constructed a number of buildings as well as a wall around the main oracle tree for protection. Dodona subsequently became the center of life in that area of Greece.

Dodona was destroyed by an invading army in 219 BCE but rebuilt by King Philip V of Macedonia (238–178 BCE). It suffered from the Roman invasion of the region in 167 BCE. The oracle continued to function into the fourth century CE, during which time the sacred tree was cut down. Theodosius the Great (347–395), the Byzantine emperor, saw to the building of a Christian basilica at the site.

Today one may visit the site. Remnants of the temple to Zeus and the Prytaneum, a resting place for the priests of Zeus, are among the ancient buildings that may be seen.

an ancient Greek city in Epirus and one of the oldest religious centers of ancient Greece, site of the Dodona oracle. Excavations begun at Dodona in the 1870’s have unearthed a well-preserved theater seating 18,000, the remnants of an acropolis, a temple of Zeus, and quarters for pilgrims.

an ancient Greek town in Epirus: seat of an ancient sanctuary and oracle of Zeus and later the religious centre of Pyrrhus' kingdom
Collins Discovery Encyclopedia, 1st edition © HarperCollins Publishers 2005