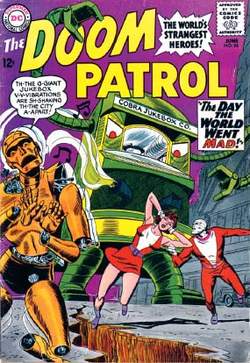 It’s asking a lot of a comic to star “the world’s strangest heroes,” but the Doom Patrol has delivered on that promise not once but twice. The veteran creative duo of writer Arnold Drake and artist Bruno Premiani introduced the team in the pages of DC Comics’ My Greatest Adventure #80 (in mid-1963). Their first story relates how the wheelchair-bound genius Niles Caulder (also called “the Chief”) summons “three victims of a cruel and fantastic fate” to his brownstone to offer them the chance of adventure—and superhero status. The three are: actress Rita Farr, who, after being affected by volcanic gas, is able to assume a large or small size (Elasti-Girl); Larry Trainor, a test pilot who was doused in cosmic rays, gaining an “energy double” made of negative energy—though this can only survive outside his body for sixty seconds (Negative Man); and Cliff Steele, a daredevil racecar driver, whose brain is transplanted by the Chief into a robot body following a cataclysmic crash (Robotman— no relation to the Golden Age [1938-1954] character of the same name).

Drake conceived the team as a response to such emerging Marvel Comics superheroes as the Fantastic Four, which emphasized characterization over the convoluted plots that were then DC’s stock-in-trade. In fact, the Marvel superhero team and comic that the Doom Patrol most closely resembled was the X-Men, which shared its lineup of bitter outsiders under a wheelchair-confined leader, a secret hi-tech hideout, and arch-villains with similar names (the Brotherhood of Evil for Doom Patrol, the Brotherhood of Evil Mutants for the X-Men). Indeed, to compound the similarities, Drake would later move to Marvel to write—you guessed it—the X-Men comic. Significantly, however, it was the Doom Patrol that came first (by three months), though, while both strips developed a committed readership, it was the X-Men which proved the more enduring of the two.

Back in 1963, however, the Doom Patrol comic soon proved popular, and with its 86th issue, My Greatest Adventure was retitled The Doom Patrol and ran under that name until issue #121 five years later. The strip had an air of sophistication about it, thanks to Drake’s well-rounded characterizations and Premiani’s accomplished, European-flavored draftsmanship, which set it apart from its rivals. The lineup was augmented by bizarre figures such as Mento, the wealthy Steve Dayton, who built himself his own (ludicrous-looking) mind-reading hairnet, and the green-skinned Beast Boy, who could change into any animal (and who later joined the Teen Titans). Villains, too, were included in abundance, such as the immortal (and very wrinkly) General Immortus, Videx (a giant with see-through skin), an enormous walking jukebox, and assorted other monsters and mutants. The aforementioned Brotherhood of Evil was a motley crew consisting of the Brain (who was just that—a brain), the shape-changing Madame Rouge, and Monsieur Mallah, who was a sentient gorilla.

In time, Mento and Elasti-Girl married, and then adopted Beast Boy, while Madame Rouge fell in love with the Chief—but the comic was perhaps too strange for some readers and cancellation became inevitable. The last issue ended with the group sacrificing themselves to save a village, and they stayed dead for a decade, but when DC’s Showcase comic was revived in 1977, so too was the Doom Patrol. It seemed that Robotman had somehow survived the explosion that killed his teammates, and he joined up with a new group of young outsiders: Tempest, Negative Woman (no relation), and Celsius, who turned out to have been married to the Chief (not that anyone knew). This new team starred in a mere three issues of Showcase, and then had to wait another ten years before being heard from again, when a new Doom Patrol comic premiered in 1987.

This second run reintroduced the original Negative Man, Larry Trainor, and in due course the Chief reappeared, so that only the unfortunate Elasti-Girl seems to have perished back in the 1960s. A couple of years into their new comic, the Doom Patrol acquired a young British writer, Grant Morrison, and became stranger than ever, picking up a more mature, cult audience in the process. Morrison introduced Crazy Jane, a schizophrenic with sixty-four different personalities, while Trainor fused with his energy being and an unfortunate nurse to become the radioactive Rebis. The cast of villains now included the Brotherhood of Dada, the Beard Hunter, and Danny the Street, who was—yes!—a sentient street. For almost four years, Morrison dreamed up some of the strangest and most imaginative comics ever seen, which managed the seemingly impossible task of combining traditional superheroes with surreal plots and serious topics (such as child abuse). After Morrison’s departure, the comic carried on in much the same vein but without his spark of inspiration, and it was canceled with its eighty-seventh issue—which was nevertheless an impressive run for such a left-field title.

John Arcudi wrote the next Doom Patrol series, which began in 2001 and ran into 2003. In 2004 John Byrne wrote and drew a new Doom Patrol comics series, starring the original team members, with Elasti-Girl and Negative Man alive once again; this series lasted for 18 issues. The Doom Patrol returned in yet another new series in 2009, written by Keith Giffen. In it Rita Farr adopts the new name Elasti-Woman (probably to avoid confusion with Elasti-Girl of Pixar’s The Incredibles).

Feedback
Flashcards & Bookmarks ?
Please log in or register to use Flashcards and Bookmarks. You can also log in with
Flashcards ?
My bookmarks ?
+ Add current page to bookmarks
Mentioned in ?
References in periodicals archive ?
There are Action Comics, DC and Marvel and lesser-known titles including Blackhawk, Challengers Of The Unknown, Atom, Doom Patrol, Tales Of Suspense, Mystery In Space and Strange Tales.
Rare first edition of The X-Men in super sale
DOOM PATROL: THE WEIGHT OF THE WORLDS #1 DON'T let the title fool you, this is actually the 13th issue of the Doom Patrol series kicked off by Gerard Way and Nick Derington.
ALL GEEK TO ME; THE LATEST GAMING, COMICS & TECH TRENDS
English and other researchers from the US, China, the UK, and Australia examine punk superhero comics, including OMAC and Captain America; Vertigo punk comics, including Hellblazer, Transmetropolitan, The Invisibles, and Preacher; underground punk comics like Binky Brown Meets the Holy Virgin, comics published following the death of dictator Francisco Franco in Spain, and Turkish punk comics from the magazines L-Manyak and Lombak; and punk manga, with discussion of Akira, Soul Eater, Durarara!!, Cyborg 009, RanXerox, and Doom Patrol. (Ringgold, Inc., Portland, OR)
I'm Just a Comic Book Boy: Essays on the Intersection of Comics and Punk
In his latest TV series from showrunner Jeremy Carver entitled "Doom Patrol," Matt plays a gay super hero, Negative Man, aka Larry Trainor.
HOLLYWOOD BULLETIN: Matt Bomer on directing Darren Criss
As a comic and a show, 'The Umbrella Academy' explores the alienation that had been explored by classic properties like DC's Doom Patrol and Marvel's X-Men but with a very contemporary touch.
The wonderfully weird world of The Umbrella Academy
Ryan Potter (most famous for voicing Hiro Hamada in 'Big Hero 6') plays Garfield 'Gar' Logan/Beast Boy -- a former member of the Doom Patrol clique, who developed the ability to shapeshift into animals, usually a tiger, as the side effect from a drug, Beast Boy is a fun-loving kid who injects much-needed humour into the otherwise sullen group.
'Titans': Everything to know about the TV show
In episode 4, "(https://www.ibtimes.com/titans-heroes-hawk-dove-have-codependent-unhealthy-relationship-minka-kelly-warns-2726080) Titans " will show Garfield bringing Rachel to his home, and viewers will get to meet the Doom Patrol and see Garfield's family.
'Titans' Star Talks Beast Boy And Raven
[USA], Sep 06 ( ANI ): Hollywood actor Timothy Dalton is all set to return to television as 'The Cheif' in DC Comics' live-action series 'Doom Patrol'.
Timothy Dalton joins DC Universe's 'Doom Patrol' series
HAPPY TO BE DOOMED Rock star Gerard Way proves he's a multitalented creative with the comic series Doom Patrol.
2018'S ICONS, INNOVATORS, & DISRUPTORS
Clapshot rattles like early Cure, while Doom Patrol is Elbow if they joined the Army.
Phantoms add pop to a krautrock backdrop; Sound check The Phantom BandStrange Friend
He reinvented Doom Patrol, and invented some really bad baddies, especially the Little Sisters of Our Lady of the Razor, and the Pale Police.
The street where I write this from is really quite nice as well, it just doesn't have any amusing dope dealers trying to hide behind the lamp poles when they see me, like on Long Street, which, in a way, makes it even nicer
Se trata de "Crawling from the Wreckage", arco argumental que abarca los numeros del 19 al 22 de la serie Doom Patrol (1989) (7) y que constituye una transposicion del relato "Tlon, Uqbar, Orbis Tertius" (Sur 68, mayo de 1940, recogido en Ficciones en 1944) al comic de superheroes.
Borges al cuadrado (o de como un grupo de superheroes impidio que el mundo se convirtiera en Tlon)