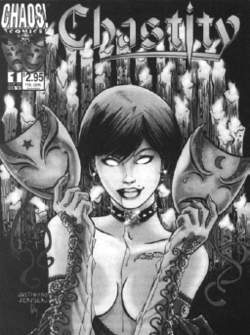 Chaos! Comics originated from the fertile imagination of writer/publisher Brian Pulido. He launched his career with Evil Ernie, published by Eternity Comics (an imprint of Malibu Comics). Although a relatively successful title, Malibu dropped Evil Ernie. Left in the lurch, and lacking any publishing experience, in November 1992 Pulido founded Chaos! Comics along with illustrator Steven Hughes and wife Francisca Pulido. The new Evil Ernie: The Resurrection, appeared in June of the following year.

Chaos! Comics quickly gained a reputation among the independent comic publishers for the quality of its publication. Pulido attempted to bring together quality horror fiction writing and state-of-the-art artwork and reproduction, with high-quality packaging. He followed Evil Ernie with a series of equally appealing characters, each of whom soon after their appearance became the subject of their own comic book title, beginning with Lady Death, and then the two new vampire creatures, Purgatori and Chastity.

Issue No.1 of Lady Death debuted in 1994 within months of the appearance of two other prominent new series featuring female characters, Shi and Vengeance of Vampirella. The three titles together launched a new phenomenon, the “Bad Girl” comic, now commanding an impressive share of the comic book market. Bad Girls were females who possessed all of the femininity for which any young male could hope while holding their own against forces that would challenge any superhero. Lady Death went on to become the top-selling female graphic art character in America. Chaos! was nominated by Diamond Comic Distribution as New Publisher of the Year in 1994 and won the Comic Buyers Guide Award for Customer Service in 1996. It secured its place in the comic world with its many innovations including the “commemorative” edition, the velvet cover, the leather cover, the “coffin“-shaped cover, the canvas cover, glow-in-the-dark chromium trading cards, and clear chromium cards.

Chaos! entered the vampire realm with the introduction of Purgatori, the demonic vampire, who made her first appearance in the March 1995 issue of Lady Death. According to her myth, Purgatori originated in ancient Egypt as a young slave named Sakkara. One day, the queen of Egypt, a lesbian, adopted her as a favorite in her harem. However, at the same time the queen was contemplating marriage with the ruler of a neighboring land who possessed the army she needed to stifle the unrest in her own land. The future bridegroom demanded that the queen kill all of her lovers. Only Sakkara managed to survive the slaughter.

She escaped and found her way to a vampire whom she had been told would give her immortality. She shared blood with Kath, the vampire, who sensed the blood of fallen angels flowing in her. He knew that she would be unique as a vampire creature, and she in fact emerged as the vampire creature Purgatori. A purely supernatural being, she had reddish skin, two horns, prominent fangs, and a set of batlike wings.

Enraged at her betrayal by the queen, she appeared at the queen’s wedding and wreaked havoc on the wedding party, in the process turning several of the distinguished guests into vampires. The new vampires would become her mortal enemies. At a later date, she summoned Lucifer and asked him to take her. As he drew her near her, she brazenly stuck her fangs in him and tasted his blood. Outraged at her impudent behavior, he banished her to Necropolis (the city of the dead) where she sought Lady Death with whom to share some blood. Lady Death wanted nothing to do with Purgatori’s schemes and banished the upstart to earth in the present to wander as a lowly bloodsucker.

Purgatori would soon be joined by young Chastity Marks in 1996 who would make her mark facing off against Evil Ernie. Chastity, a teenager who became a vampire in London while working as a roadie for a punk rock band, would go on to become Ernie’s enemy in his post-apocalyptic world.

The last series featuring Purgatori and Chastity appeared from Chaos! in 2002. That year, Chaos! Comics ran into severe financial problems and was forced to declare bankruptcy. Its vampire titles were sold to Tales of Wonder, who licensed them to Devil’s Due Publishing. Devil’s Due brought out only one series with a Chaos! vampire character, a last series featuring Purgatori (2005), but cancelled it when sales were low.