Doric order, earliest of the orders of architecture developed by the Greeks and the one that they employed for most buildings. It is generally believed that the column and its capital derive from an earlier architecture in wood. The cornice details, which have a resemblance to carpentry forms, have also led to the theory of its origin in wooden forms. The type had arrived at a definite form in the 7th cent. B.C., but further improvements produced the perfected order of the 5th cent. B.C. as it appeared in the Parthenon and the Propylaea at Athens (see under propylaeum). It continued to be used by the Greeks until about the 2d cent. B.C. The Greek Doric column has no base. Its massive shaft, generally treated with 20 flutes, terminates in a simple capital composed of a group of annulets, a projecting curved molding called the echinus, and a square slab or abacus at the top. The entablature, which is generally about one third the column height, consists of a plain architrave, a frieze ornamented with channeled triglyphs between which are square spaces or metopes sometimes used for sculpture, and a cornice. The cornice has projecting blocks or mutules in its exposed lower surface or soffit, above which is a plain vertical face or corona, finished by a group of crowning moldings. The proportions, heavy in the earliest Doric columns, became more slender in the perfected type, the entasis became less sharp, and the echinus projection was diminished. The Roman Doric, while derived from the Greek, was probably also influenced by a simple and slender column developed by the Etruscans. It was infrequently used, but examples are seen in the Colosseum and the theater of Marcellus. The column differs from the Greek in its addition of a base and in changes in the capital profile. The 16th-century Italians established as a Tuscan order a form of simplified Doric in which the column had a simpler base and was unfluted, while both capital and entablature were without adornments. For the other Greek orders see Ionic order and Corinthian order. See also orders of architecture.
The Columbia Electronic Encyclopedia™ Copyright © 2022, Columbia University Press. Licensed from Columbia University Press. All rights reserved.

The first and simplest of the orders, developed by the Dorian Greeks, consisting of relatively short shafts with flutes meeting with a sharp arris, simple undecorated capital, a square abacus, and no base. The entablature consists of a plain architrave, a frieze of triglyphs and metopes, and a cornice. The corona contained mutules in the soffit.

one of the three principal Greek architectural orders. It developed in the Dorian region of ancient Greece in the period in which stone began to be used in the construction of temples and other public buildings. The Doric order was used as early as 600-590 B.C. in the first stone buildings on mainland Greece and in the Dorian colonies, for example, the Temple of Artemis, built at the beginning of the sixth century B.C. in Kerkira. The Doric order, the most severe and massive of the architectural orders, became the most important element of architectural composition in the sixth and fifth centuries B.C. and the main vehicle of artistic expressiveness in the architecture of the late archaic and classical periods. 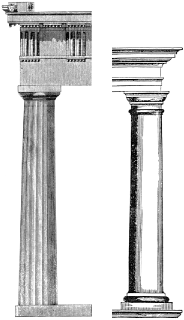 Doric order:a, Greek; b, Roman
In Classical architecture and derivatives, the column and entablature developed
McGraw-Hill Dictionary of Architecture and Construction. Copyright © 2003 by McGraw-Hill Companies, Inc.

Feedback
Flashcards & Bookmarks ?
Please log in or register to use Flashcards and Bookmarks. You can also log in with
Flashcards ?
My bookmarks ?
+ Add current page to bookmarks
Mentioned in ?
References in periodicals archive ?
For example, in a comparison of The Temple of Hephaestus, built in Athens in 449 BC using the Doric Order and St.
How To Read Buildings: A Crash Course in Architectural Styles
For all the arguments over its provenance, the Doric order plainly owes at least something to timber precedents.
Wood spirit
Many of the reconstructed buildings show evidence for the rejection of current architectural fashions for the Corinthian order and preference for the use of the Doric order. How far does the Apollo actually follow Classical principles of design, and would the people have regarded the cult statue as a memorial to the Classical styles?
The Cyrene Apollo
But what is most intriguing is that these triglyphs also appear on the recessed rounded corners of the wings, as if a Doric order is buried in the wall and exposed at these points--an essay in Mannerism which might be Turner's own invention.
Architecture: Sandycombe lodge, built by J.M.W. Turner in Twickenham in 1812, offers an intriguing glimpse of the painter's architectural potential. The Turner House Trust is now seeking to restore it--which may require an innovative solution for its future use
Scully's reference to the Doric order is interesting, in light of his position in the history of abstract painting.
Painting the future: Irish-American artist Sean Scully is known for his emotionally-driven paintings, consisting of intense blocks of colour. He spoke to Apollo about his personal mission to allow the world back to abstraction
Although both use the Doric order, these elements are not integrated as they are, say, with Decimus Burton's nearby (Ionic) screen at Hyde Park Corner; instead, the entablature of the lower colonnades springs arbitrarily from the side walls of the pavilion.
Architecture: the planned World War II memorial to the dead of RAF Bomber Command in London's Green Park may be a worthy cause, but it is at the wrong scale and in the wrong place