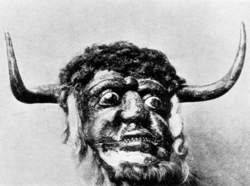 Up until the beginning of the twentieth century, many of the small villages in the West Country of England—Devon, Cornwall, Somerset, and Dorset—had what was known as an oozer. This was a wooden mask with attached hair, beard, and bull's horns. Together with the skin of a bull, it was worn by the head man as he danced and pranced his way about the bounds of the village at certain times of the year. He was representing the old horned god—a god of hunting and of fertility. The word oozer is of unknown origin, although Doreen Valiente suggests that it comes from the Old English Os, meaning "a god"; it might also be noted that os is Latin for "mouth."

Valiente also suggests that the oozer was worn as part of a ritual during the Yule season, basing this on the words of Theodore (Archbishop of Canterbury from 668 to 690 CE), who said, "Whoever at the Kalends of January goes about as a stag or a bull; that is, making himself into a wild animal and dressing in the skin of a herd animal, and putting on the heads of beasts; those who in such wise transform themselves into the appearance of a wild animal, penance for three years because this is devilish" (Liber Poententialis). Valiente says that a similar figure played a part in the wassail celebrations of Kingscote, Gloucestershire.

Ralph Whitlock links the oozer of Melbury Osmond, Dorset, to the Beltane celebrations rather than, or in addition to, the Yule rites. He says that it was worn and used as part of the ritual that took place around the Maypole, in the Trendle or Frying Pan earthworks above the head of the Cerne Abbas Giant figure. This is a huge, 180-feet-tall, male figure, brandishing a club and sporting an erect penis, carved into the chalk on the hillside near the village of Cerne Abbas, Dorset.

The ancient Dorset Oozer of Melbury Osmond was one of the last known to exist. It had been in the safekeeping of the Cave family for generations until, during a relocation hiatus, a servant of the Caves sold it to an unknown person from another part of Dorset. It was never traced, and Valiente suggests it may now be owned by a Witch coven more appreciative of its history and representation.