[¦dəb·əl ′bänd]
(physical chemistry)
A type of linkage between atoms in which two pair of electrons are shared equally.
McGraw-Hill Dictionary of Scientific & Technical Terms, 6E, Copyright © 2003 by The McGraw-Hill Companies, Inc.
The following article is from The Great Soviet Encyclopedia (1979). It might be outdated or ideologically biased.

a covalent four-electron bond between two neighboring atoms in a molecule. A double bond is usually designated by two valence lines: >C═C<, >C═N─, >C═O, >C═S, ─N═N ─, ─N═O, and so on. It is understood that one pair of electrons with sp2- or jp-hybridized orbitals forms a σ-bond (see Figure 1), whose electron density is concentrated along the interatomic axis; a σ-bond is similar to a single bond. The other pair of electrons with p-orbitals forms a σ-bond, whose electron density is concentrated outside the interatomic axis. If atoms of Groups IV and V of the periodic system participate in the formation of a double bond, then they and the atoms directly bonded to them lie in a single plane; the valence angles equal 120°. In the case of asymmetrical systems, deformations of molecular structure are possible. 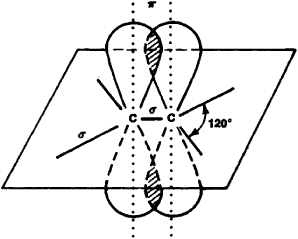 A double bond is shorter than a single bond and is characterized by a high energy barrier of internal rotation; therefore, the positions of the substituents when there are double-bonded atoms are not equivalent, and this causes the appearance of geometric isomerism. Compounds containing a double bond are capable of addition reactions. If the double bond is electron-symmetrical, the reaction is accomplished by means of radical mechanisms (homolysis of the π-bond), as well as ionic mechanisms (as a result of the polarizing

Figure 2. Systems of conjugated bonds (view from above)

action of the medium). If the electronegativities of the double-bonded atoms differ, or if different substituents are bound to them, the σ-bond is strongly polarized. Compounds containing a polar double bond tend toward addition by the ionic mechanism: nucleophilic reagents combine readily with an electron-acceptor double bond; electrophilic reagents combine readily with an electron-donor double bond. The direction of electron displacement in double-bond polarization is indicated conventionally in formulas by arrows, and the excess charges formed are shown by the symbols δ- and δ+. This facilitates understanding of the radical and ionic mechanisms of addition reactions:

In compounds with two double bonds that are divided by one single bond, there occurs conjugation of the π-bonds and formation of a single π-electron cloud, whose lability is manifested along the entire chain (Figure 2, left). The capacity for reactions of 1,4-addition is the result of such conjugation:

If three double bonds are conjugated in a six-membered cycle, the sextet of π-electrons becomes common to the entire cycle, and a relatively stable aromatic system is formed (see Figure 2, right). The addition of both electrophilic and nucleophilic reagents to such compounds is difficult in terms of energy.

Feedback
Flashcards & Bookmarks ?
Please log in or register to use Flashcards and Bookmarks. You can also log in with
Flashcards ?
My bookmarks ?
+ Add current page to bookmarks
Mentioned in ?
References in periodicals archive ?
Unlike the saturated halogen refrigerants which are free to rotate into different orientations in three-dimensional space, olefin refrigerants contain a carbon double bond that does not allow the molecule to rotate freely.
Comparing Atmospheric Stability Versus HVACR Equipment Chemical Stability of New Low GWP Olefin Based Refrigerants
The unbaked pans and the uncatalzyed samples were tested for residual double bonds per the FTIR method above.
Isocyanat-free michael addition cured aliphatic topcoats
The results showed that the reactions involved the acrylic double bond and the conjugated double bonds.
Incorporation of an acrylic fatty acid derivative as comonomer for oxidative cure in acrylic latex
FTIR measurements and iodine number titration have indicated the disappearance of double bonds as a result of the radical reaction.
A novel methodology for controlled migration of antifog from thin polyolefin films
C2-C3 double bond and 3'4'-OH might be important for antiradical activity: As a salient feature of the most potent scavengers the 3'-4'-catechol structure of B-ring for flavonoids strongly enhances the activities against peroxyl superoxide and peroxynitrine radicals (Heim et al.
COMPARATIVE FUNCTION-STRUCTURAL ANALYSIS OF ANTIPLATELET AND ANTIRADICAL ACTIVITIES OF FLAVONOID PHYTOCHEMICALS
One of the most common methods to determine the extent of double-bond conversion is Fouriertransform infrared spectroscopy (FTIR), (2,11) which can detect the stretching vibrations of carbon-carbon double bonds involved in polymerization.
Discrepancies in degree of conversion measurements by FTIR
Comparing the spectra of SPE with UPE, it is evident that there are significant differences in the peaks corresponding to both the hydroxyl group and the double bond. As expected, the SPE is characterized by a broad hydroxyl stretching peak around 3444 [cm.sup.-1] and the complete disappearance of the double bond peak at 3010 [cm.sup.-1], while the UPE exhibits a peak for the double bond but not the hydroxyl group.
Preparation of novel high-temperature polyol esters from vegetable oils
Therefore, it was considered that the double bonds did not make the bonding each other which are just the [pi]-[pi] stacking (as Figure 3(a)).
Ultradurable dye-sensitized solar cells under 120[degrees]C using cross-linkage dye and ionic-liquid electrolyte
The geometry around E=E double bond of all the dimetallenes is diversified depending on the trialkylsilyl substituents.
Bonding and structure of disilenes and related unsaturated group-14 element compounds
FTIR was also applied to research the effect of double bond concentration on the kinetics of photopolymerization.
Synthesis, photopolymerization kinetics, and thermal properties of UV-curable waterborne hyperbranched polyurethane acrylate dispersions
Our results suggest the formation of palladium hydride (Pd-H) via hydrogen transfer from the hydrogen donor to the palladium catalyst; this results in the hydride donating a hydrogen to the double bond of the sunflower oil and generates a semi-hydrogenated intermediate that is converted into the saturated product by the transfer of another hydrogen from the hydride.
An alternative process for hydrogenation of sunflower oil