[¦dəb·əl ri′frak·shən]
(optics)
birefringence
McGraw-Hill Dictionary of Scientific & Technical Terms, 6E, Copyright © 2003 by The McGraw-Hill Companies, Inc.
The following article is from The Great Soviet Encyclopedia (1979). It might be outdated or ideologically biased.

splitting of a light ray in an anisotropic medium (for example, in a crystal) into two components, which are propagated at different speeds and are polarized in two mutually perpendicular planes. Double refraction was first discovered and described by the University of Copenhagen professor E. Bartholin in 1669 in a crystal of Iceland spar. A pencil of light that is incident at right angles to the crystal’s surface is broken down into two pencils, one of which continues along its original path without refraction, as in an isotropic medium, while the other is deflected to one side, thus violating the usual law of light refraction (Figure 1). Accordingly, the rays of the first pencil are called ordinary rays, whereas the rays of the second pencil are called extraordinary rays. The angle formed by the ordinary and extraordinary rays is called the angle of double refraction. If, in the case of the perpendicular incidence of the pencil, the crystal is rotated about the pencil, then the trace of the ordinary ray remains stationary in the center, and that of the extraordinary ray rotates about a circle. 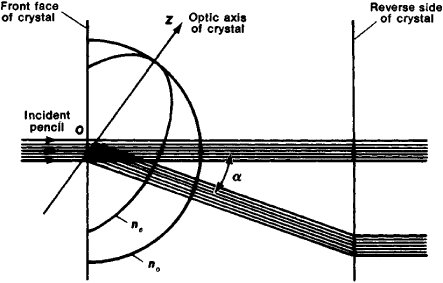 Double refraction can also be observed at an oblique incidence of the light ray onto the crystal surface. Iceland spar and some other crystals contain only one direction along which double refraction does not take place. This direction is called the optic axis of the crystal, and crystals of this type are called uniaxial crystals.

Table 1 shows that the double refraction characterized by

the quantity and sign of Δ may be either positive or negative. Accordingly, positive and negative (uniaxial) crystals are distinguished.

In transparent crystals, the intensities of the ordinary and extraordinary rays are practically the same, if the incident light is natural. Separating one of the rays resulting from double refraction with a diaphragm and passing it through a second crystal again results in double refraction. However, the intensities of the ordinary and the extraordinary rays will be, in this case, different because the incident ray is polarized. The ratio of intensities depends on the mutual orientation of the crystals expressed by the angle Ф, which is formed by the planes of the main cross sections of both crystals (planes passing through the optic axis and the light ray). If Ф = 0° or 180°, then only the ordinary ray remains. At Ф = 90°, however, only the extraordinary ray remains. At Ф = 45°, the intensity of both rays is the same.

In the general case, the crystal may have two optic axes, that is, two directions along which double refraction is absent. In biaxial crystals, both rays generated by double refraction behave as extraordinary rays.

Measurement of Δ in those cases when double refraction is large may be performed by a direct determination of the indexes of refraction using prisms or special crystal refrac-tometers, which make it possible to perform measurements in various directions. In many cases (particularly for thin layers of anisotropic substances), when the spatial separation of the two rays is so small that it is impossible to determine no and ne the measurements are made by observing the nature of the polarization of light as it passes through a layer of an anisotropic substance.

Double refraction is explained on the basis of the special features of electromagnetic wave propagation in anisotropic mediums. The electric field of the light wave E, penetrating into a substance, generates forced vibrations of the electrons in the atoms and molecules of the medium. The vibrating electrons are, in turn, sources of the secondary emission of light. Thus, the passage of a light wave through matter is a result of the sequential reemission of light by the electrons. In an anisotropic substance, vibrations of electrons are excited more easily in certain definite directions. For this reason, waves with various polarizations will be propagated with different velocities in anisotropic substances.

In addition to crystals, double refraction is observed in artificially anisotropic mediums (in glass, liquid, and other materials) placed in an electric field (Kerr effect) and in a magnetic field (Cotton-Mouton effect), under mechanical stress, and under similar conditions. In these cases, the medium becomes optically anisotropic and the optic axis is parallel to the direction of the electric field, magnetic field, and so forth.

Feedback
Flashcards & Bookmarks ?
Please log in or register to use Flashcards and Bookmarks. You can also log in with
Flashcards ?
My bookmarks ?
+ Add current page to bookmarks
Mentioned in ?
References in periodicals archive ?
as opening a new path to the solution of the great problem of double refraction" ([21], p.
On the role of T. J. Seebeck in the discovery of the photoelastic effect in glass/T. J. Seebecki osast klaasi fotoelastsusefekti avastamisel
Invoking this theory to account for double refraction in crystal shapes, Fresnel claimed that most light waves are transverse, comprised of several waves moving in various directions; however, crystals and other transparent surfaces split these multidirectional waves into two unidirectional currents that constitute two equivalent images.
Emersonian transparency and the anatomy of crystal
This effect is called plane-polarized light or double refraction. The double refraction occurs when a ray of light enters the crystal and, due to calcite's unique optical properties, the ray is split into fast and slow beams.
Science & Art: A Makeup Fantasia (1)
This double refraction can leave a very small interstice through which to view the poet's achievements.
Yeats Annual 12
Neither Newton's particles nor Huygen's longitudinal waves could explain Bartholin's observation of double refraction nine years before, but that was ignored.
Light waves
This Ibn Sahl had successfully treated the phenomenon of double refraction in a sphere, which led him to treat the subject of lenses, and allowed Kamal al-Din al-Farisi (d.
The optics of Ibn al-Haytham: Books I-III, On Direct Vision