pink, common name for some members of the Caryophyllaceae, a family of small herbs found chiefly in north temperate zones (especially the Mediterranean area) but with several genera indigenous to south temperate zones and high altitudes of tropical mountains. Plants of this family typically have stems that are swollen at the nodes and notched, or “pinked,” petals ranging in color from white to pink, red, and purple. The family includes several ornamentals and many wildflowers and weeds, many of them European species now widely naturalized elsewhere.

Ornamental pinks include the spicily fragrant flowers of the large genus Dianthus, an Old World group including the carnation (D. caryophyllus), sweet William (D. barbatus), Deptford pink (D. armeria), and most other flowers called dianthus or pink (some of the latter belong to other genera of the family). In over 2,000 years of cultivation (the name Dianthus was mentioned by Theophrastus c.300 B.C.) the carnation has given rise to about 2,000 varieties, all derived from the single-flowered, flesh-colored clove pink, known in Elizabethan times as gillyflower. Formerly added to wine and beer as a flavoring, it is now used in perfumery. The sweet William bears its blossoms in dense clusters; wild sweet William, an American wildflower, is an unrelated species of the phlox family. The most popular ornamental pinks—the maiden pink (D. deltoides) and especially varieties of the garden, or grass, pink (D. plumarius)—have escaped from cultivation and now grow wild in the United States. This is true also of other ornamentals, e.g., the ragged robin, or cuckoo flower (Lychnis flos-cuculi), the bouncing Bet (Saponaria officinalis), and the baby's breath (Gypsophila paniculata). The ragged robin was once known as crowflower; it was probably the crowflower used by Ophelia in her garland (Shakespeare's Hamlet). The bouncing Bet, cultivated in colonial America, is the best-known American soap plant; it is also called soapwort, as are other species of the genus. The baby's breath is an unusual member of the family in being a bushy plant; it is much used as a bouquet filler.

Wildflowers of the family that have indigenous American species include the pearlworts (genus Sagina), sandworts (Arenaria), campions and catchflies (species of several genera, especially Lychnis and the widespread Silene), sand spurries (Spergularia), and chickweeds (species of several genera, e.g., Stellaria and Cerastium). Chickweed, relished by birds, is sometimes used for greens and for poultices; catchflies (e.g., Silene virginica of the E United States, also called fire pink) are named for the fringed teeth or claws of their deeply lobed petals. The common chickweed (Stellaria media), the moss campion (Silene acaulis), and the common spurry (Spergula arvensis) are now nearly cosmopolitan weeds, having spread from parts of the Old World. Spurry, cultivated in Europe as a pasture, hay, and cover crop, is sometimes planted to hold sand in place. 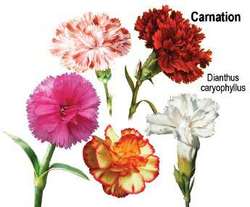 Surprisingly sweet flower petals can be used in desserts. Cut them away from the bitter white base of the flower. Dianthus are like tiny carnations with a light clove-like or nutmeg scent. Use petals to add color and sweet taste to dishes and salads.
Edible Plant Guide © 2012 Markus Rothkranz
The following article is from The Great Soviet Encyclopedia (1979). It might be outdated or ideologically biased.

a genus of annual and perennial grasses, very rarely semishrubs, of the family Caryophyllaceae. The stems are slightly knotty. The leaves are opposite, sessile, linear, and lanceolate or subulate. The bracts are close to the calyx. The flowers (frequently beautiful, with a very pleasant scent) are pinnate and grow singly or in clusters. Approximately 300 species are known in Europe (mainly in the Mediterranean area), Asia, and Africa. In the USSR there are slightly more than 100 species growing in steppes, meadows, pine forests, sandy areas, and cliffs.

Maiden pink (Dianthus deltoides) is widely distributed throughout the European part of the USSR. Many varieties of Dianthus have long been cultivated as decorative plants. The best-known is the carnation (D. caryophyllus), which originated in southern Europe, A perennial, it served as a point of departure for the creation of many valuable garden varieties, grouped according to decorative qualities, biological peculiarities, and specific use. The solitary large flowers usually grow many to a stem, are fragrant, and come in various colors (red, pink, yellow, or white). They are cultivated in open ground; usually the Chaband (as annuals) and the grenadine carnations (as a two-year variety) are intended for picking. The Deptford pink is grown on protected ground to be used for cutting.

Sweet William (D. barbatus), a perennial that is cultivated as a biennial, is native to central and southern Europe. Its small flowers grow in dense racemes, either simple or double, and in various colors among the garden forms and varieties; there are also red-leaf forms. Sweet William is used in flower gardens and for cutting.

Pheasant’s-eye pink (D. plumaris), a perennial that originated in the Alps, comes in a number of shapes and varieties, basically hybrid, with simple or double highly fragrant flowers. It is cultivated in flower gardens and for cutting.

Chinese pink (D. chinensis) is an annual that apparently originated in eastern China. The numerous garden types and varieties, especially the heddewigii varieties (D. chinensis heddewiggi) are distinguished by original, motley coloring of the simple and double scentless flowers. Many species of perennial Dianthus are planted in alpine gardens and stony plots. Traditionally, red carnations are a symbol of revolution.

The Russian word for Dianthus, gvozdika, is also the name for the spice obtained from dried buds of the clove tree.