stick used in searching for underground water or minerals. This form of divination is still in common use in many parts of the world. The instrument is typically a forked twig. The operator holds the forked ends of the twig close to his body, with the stem pointing forward. When he walks over a spot under which water or the desired mineral lies, the stem of the divining rod is supposedly pulled down. Impartial research, however, has indicated that successes in this method result mostly from chance and possibly also from a heightened sensitivity to visual cues of which the diviner is unaware.
The Columbia Electronic Encyclopedia™ Copyright © 2013, Columbia University Press. Licensed from Columbia University Press. All rights reserved. www.cc.columbia.edu/cu/cup/ 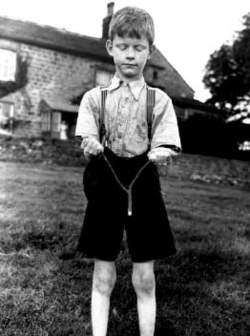 Divining rods were used by the ancient Greeks, Romans, Persians, and Scythians to discover the location of water or of various minerals. Basically a forked or Y-shaped stick, the hazel twig seems to have been the favorite, especially for finding water. For finding metals, popular woods were: hazel for silver, iron and steel for gold, ash for copper, and pitch pine for lead and tin. Other popular general purpose sticks are of ash, rowan, or willow.

The method is for the operator to hold the two ends of the stick in his or her hands and to walk over the area thought to be the probable source for the water or mineral. As the operator crosses the underground source, the twig will twist in the hands, often with such force that any bark may be stripped from the wood. In the Bible, Moses dowsed for water in the desert, using his staff as a divining rod (Exodus 17; Numbers 20). Marco Polo found rods in use throughout the orient in the late thirteenth century. Georg Agricola gave the first printed description of a dowsing or divining rod in his book De re metallica (Basel, 1556). Agricola’s interest was primarily with mining and locating minerals, but the techniques he describes are the same as those used for water divining or water witching. A well known illustration from his book shows a variety of men both digging and walking about with Y-shaped rods in their hands. One man is in the act of cutting a forked branch from a tree.

In Sebastian Münster’s Cosmographia universalis (Basel, 1544), there is an illustration of a man divining with a forked stick and showing a cross-section of the ground beneath him, where miners are at work. There is a bas relief in the Shantung Province of China showing Yu, a “master of the science of the earth and in those matters concerning water veins and springs.” He is shown holding a forked instrument.

Modern dowsers have developed such sensitivity and skill that they are able to measure the actual depth at which the substance will be found and, in the case of water, the rate of flow. According to the British Society of Dowsers, although no thorough scientific explanations for dowsing have yet been found, it is generally acknowledged that there is some correlation between the dowsing reaction and changes in the magnetic flux of the site being dowsed. In 1910, German scientist Baron Karl von Reichenbach said that the movement of the rod was due to earth force fields sending out radiations and vibrations which are picked up by the dowser.

As well as branches, many dowsers today use tools as varied as bent wire coat hangers, pendulums (with cavities for a “witness”—samples of what is being sought), and commercially produced, swinging rods especially designed for the purpose. Many modern well-drilling companies employ a diviner, or dowser, on their force. Some even guarantee that if they can’t find water, there will be no charge.

Dowsers have been widely employed around the world. The Government of India had an official Water Diviner who, between 1925 and 1930, traveled thousands of miles and located numerous wells and bore holes. In more recent years, the British Society of Dowsers had one of their experts go to southern India, where he sited boreholes for more than 1,800 previously dry villages.

As with any form of psychic or mediumistic skill, everyone has within them the inherent ability. But as with any other psychic skill, it is by practice and constant use that that skill is developed. As with so much in the field of psychic and mediumistic development, young children seem to be able to draw upon the skill much more easily and naturally than do adults.

[də′vīn·iŋ ‚räd]
(mining engineering)
An unscientific device in the form of a forked rod or tree branch that is supposed to dip when held over water or minerals, depending on the specialty of the operator, or dowser. Also known as dowsing rod; wiggle stick.
McGraw-Hill Dictionary of Scientific & Technical Terms, 6E, Copyright © 2003 by The McGraw-Hill Companies, Inc.

Feedback
Flashcards & Bookmarks ?
Please log in or register to use Flashcards and Bookmarks. You can also log in with
Flashcards ?
My bookmarks ?
+ Add current page to bookmarks
Mentioned in ?
References in periodicals archive ?
I am puzzled by the statement that "there is no consensus as to why the dowsing rods move." I thought that it had long been established by scientists that have tested the ability of dowsers that ideomotor action is at play.
Mike," a cardboard box outfitted with two dowsing rods, who accompanied the experimenters during the trials.
Re.: Vol. 15, No. 1, "Utility and Limits of Dowsing Rods ..." by J. S. Janks
By the 17th and 18th centuries the dowsing rod was found in lists of "essential scientific instruments" and had gathered a considerable documentary background.
The photo above shows the proper way to hold the dowsing rod. Curl the hands back towards your wrists with knuckles facing downward.
The disappearing art of dowsing
I didn't even tell him they were meeting in the cup until afterwards - just in case it prejudiced his dowsing rods.
THAT FENG YOU DO!; CHINA SYNDROME: Can the wisdom of the Orient help win today's Scottish Cup?
In the May Physics World, the monthly magazine of the United Kingdom Institute of Physics, he reports that he can get dowsing rods to rotate whenever they pass over or under a linear stretch of pipe, cable, or telephone line.
For millennia, humans have scouted for underground aquifers and other natural resources with the help of dowsing rods. More recently, diviners have expanded their efforts by looking for buried utility lines.
Dowsing expectations: new reports reawaken scientific controversy over water witching
"Dowsing rods" move because of large changes in electrical conductivity.
Dowsing rods (two hand-held metallic wires are almost universally referred to as "dowsing rods" regardless of the application; we will follow that convention) have been the subject of controversy for centuries.
Utility and limits of dowsing rods to chart the subsurface
UK Haunted use night vision cameras, electro- magnetic field devices, and dowsing rods.
Ghost hunters go on the trail of pub spirits
With copper dowsing rods, they methodically began to work their way through the flat checking that the previous dowsing had cleared the negative lines.
Homestyle: When fengs ain't what they used to be...; DOWN ON YOUR LUCK, LOVE OR JUST LIFE IN GENERAL? THEN MAYBE YOU NEED TO CALL IN A SPACE CLEARER. JANEY LAWRENCE TRIES OUT THE NEWEST CRAZE SINCE FENG SHUI
* The lowest and highest of the frequencies of the imprint gave the same phase of dowsing reaction, namely an anti-clockwise rotation of the pendulum or the coming together of dowsing rods. Other frequencies alternately gave an anti-phase reaction, a clockwise rotation of the pendulum, or the separation of dowsing rods.
Dowsing as a quantum phenomenon