Dr. No | Article about Dr. No by The Free Dictionary
https://encyclopedia2.thefreedictionary.com/Dr.+No
Printer Friendly 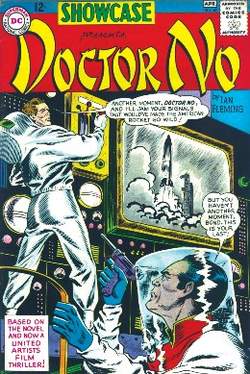 (pop culture)
Dr. Julius No, another of the latter-day Oriental masterminds in the mold of Dr. Fu Manchu, towers over James Bond—literally. He is a good half foot taller than Bond, his excellent posture adding to the impression of height. As described by Ian Fleming in his novel Dr. No (1958), “[No's] head was also elongated and tapered from a round, completely bald skull down to a sharp chin so that the impression was of a reversed raindrop— or rather, oildrop, for the skin was of a deep almost translucent yellow.” No has, instead of hands, steel pincers; his hands were forcibly amputated by one of the Chinese Tongs, from whom No embezzled a million dollars. From his base on Crab Key Island off Jamaica, where his cover is that of a dealer in bird guano, No sabotages U.S. missile tests for Soviet Russia. Beneath his island, No has constructed a fortress that puts Bond to “a great deal of pain.” There Bond is dumped into an electrified tunnel of tortures that includes scalding heat, freezing cold, twenty tarantulas, and a giant squid. His physical nature and his sadistic bent cause No to stand out even among Bond's adversaries and his inevitable death is one of the most abhorrent in the entire Bond canon, but he lives on in the form of a set of trading cards produced for collectors. Dr. No was the sixth James Bond novel, but the first James Bond film. Dr. No (1962), directed by Terence Young, features Joseph Wiseman as No. Given that the cold war has thawed, No is no longer in the pay of the U.S.S.R.; he now works for SPECTRE, a worldwide criminal group whose acronym defines its purpose: Special Executive for Counterintelligence, Terrorism, Revenge, and Extortion. The novel was adapted into a comic strip in Britain in 1960; DC Comics published a comicbook adaptation (Showcase #43) of the film in 1963.
The Supervillain Book: The Evil Side of Comics and Hollywood © 2006 Visible Ink Press®. All rights reserved.

Feedback
Flashcards & Bookmarks ?
Please log in or register to use Flashcards and Bookmarks. You can also log in with
Flashcards ?
My bookmarks ?
+ Add current page to bookmarks
References in periodicals archive ?
Pazdur is one of the legion of "Dr. No's" at the FDA, as described by former National Cancer Institute director Vincent DeVita in his book, The Death of Cancer (Sarah Crichton Books, 2015).
The FDA's Dr. Nos: the agency's fear of Type II errors inhibits drug development and harms patients
Adam created the sprawling, futuristic lairs of the super-villains who populated the Bond films, starting with Dr. No's secret island complex in the first 007 film in 1962.
Adam designed 007 films, Dr. Strangelove'
One reason why Bond movies are popular and relevant is their cunning ability to web into their plot the current realities in the world, from Dr. No to SPECTRE.
James Bond, Built to Last
Advanced persistent threats, on the other hand, are much more sophisticated and require a "James Bond" approach to impede the Dr. No's.
A tale of two hacks: what every CEO should know about advanced persistent threats and industrialized hacking
12 Jonathan Meese: Dr. No's Diamond Plantation Jan.
Frankfurt
The American Film Institute will bring Dr. No front and center June 12, presenting him with a lifetime achievement award, but I wish his achievements had been more prolific.
Beatty's no yes-man
In his review of the film for the Chicago Sun-Times , Roger Ebert noted that Moore "has the superficial attributes for the job: The urbanity, the quizzically raised eyebrow, the calm under fire and in bed." But the critic felt the film's villains were lacklustre, not "worthy of the Goldfingers, Dr. Nos and Oddjobs of the past."
Remembering Roger Moore's James Bond canon
Encyclopedia browser ?
Full browser ?
CITE
Site: Follow: Share:
Open / Close