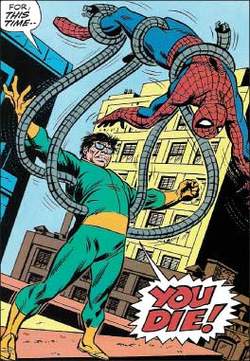 (pop culture)
Armed and utterly dangerous, Marvel Comics' Dr. Octopus, first seen in Stan Lee and Steve Ditko's The Amazing Spider-Man (ASM) #3 (1963), was the first supervillain to defeat the web-slinger. Dr. Otto Octavius, “the most brilliant atomicresearcher in our country today,” is the creator of a set of four telescoping, mechanical tentacles that allow him to work with radioactive materials from a secure distance. The apparatus, worn around his ample midsection and controlled by rotary dials, earns him the nickname “Dr. Octopus” from his coworkers. A nuclear explosion grafts the robotic arms to his person, and Octavius, now able to manipulate the appendages with his mind—which is criminally corrupted in the mishap—becomes the megalomaniacal Dr. Octopus. As “Doc Ock” takes over the atomic plant that once employed him, he unflinchingly overpowers the brash young Spider-Man with his lightning-fast arms (“He beat me! I—I never had a chance!” ruminates the humbled hero). In a rematch, Spidey blinds Octavius with a well-aimed webbing spurt and kayos “the most dangerous villain I've ever faced.” (Curiously, a lettering error—or perhaps an editorial joke—on page eight of that tale has Ock calling his nemesis “Super-Man.”) At a mere glance, one might not regard Dr. Octopus as threat. Portly, of meager height, bespectacled (often in goggles), and sporting a bowl cut that should earn the license revocation of his barber, Doc Ock looks remarkably like singer Roy Orbison (a theory that reclusive artist Steve Ditko patterned the character's face after the legendary “Pretty Woman” crooner's has long circulated throughout comics fandom). Normally attired in olive drabs and orange work gloves, Dr. Octopus might even be mistaken for a trash collector. Yet to underestimate Doc Ock is to risk one's life. His telepathic command of his titanium tentacles is uncanny. Normally 6 feet in length, the arms can instantaneously elongate to 25 feet and zoom, either in tandem or autonomously, at 90 miles per second. Each limb posses a three-prong pincer that can delicately caress a grape or forcefully crush a cinderblock. Dr. Octopus frequently walks on two or four of his robotic arms like stilts, and uses them to climb walls … ironically, like a spider. In Dr. Octopus' return in ASM #11–#12 (1964), the madman again trounced Spidey (who was severely weakened by a viral infection) and exposed his Peter Parker identity to the public. Fortunately, it was assumed that Parker was masquerading as the web-slinger to obtain newspaper photos of Doc Ock. A vengeful Dr. Octopus was back in The Amazing Spider-Man Annual #1 (1964) with “friends” in tow: fellow Spider-foes Electro, Kraven the Hunter, Sandman, the Vulture, and Mysterio, banding together as the Sinister Six. Ock lost to Spidey in these adventures, his bruised ego deepening his hatred of the arachnid hero. Spider-Man soon had plenty of reasons to dislike Dr. Octopus: Doc Ock rented a room in the home of gullible, elderly May Parker—Peter's beloved Aunt May—in a four-issue storyline in ASM #53–#56 (1967–1968), written by Lee and illustrated by John Romita, Sr. Hiding his mechanical arms under an overcoat, Octavius was unaware that his unassuming suburban hideout was the home of his foe's relative. Later in this serial, Dr. Octopus misled the amnesiac Spidey into becoming his partner in crime, sullying the web-slinger's already-precarious reputation. In 1970, Doc Ock was responsible for the death of police Captain Stacy, father of Peter Parker's girlfriend Gwen. And at no time did Dr. Octopus ever get under Spider-Man's skin more than his attempt to marry Aunt May: Gerry Conway and Ross Andru's “My Uncle … My Enemy?” in ASM #133 (1974) featured Spidey disrupting their wedding, throwing punches, not rice. Time and time again, Dr. Octopus has returned to continue his grudge match against Spider-Man, each time more crazed than before. While Spidey has become adept at dodging Ock's tentacles, his defensive spider-sense cannot ready him for the absolute brutality of his opponent's attacks. Doc Ock has fought other heroes, including the Fantastic Four and Daredevil, but his wallcrawler fixation is unwavering. As with many characters whose adventures have spanned decades, Dr. Octopus once died. The assassin Kaine offed Ock in 1995's Spectacular Spider-Man #221, inspiring not only a posthumous three-issue miniseries (Spider-Man: Funeral for an Octopus) but also a replacement. Octavius' scientific protégé Carolyn Trainer, smitten with the twisted genius, accepted the call to arms to become the curvaceous Dr. Octopus II, upgrading the tentacles with lasers and a force field. Otto Octavius soon returned from the dead, reuniting with his robotic arms and resuming his bloodthirsty vendetta against the amazing Spider-Man. A slightly altered version of Dr. Octopus exists in Marvel's Ultimate Spider-Man series (2000–present), a reimagining of the character (and the entire Marvel Universe). Ultimate Doc Ock has morphing arms, is a strapping physical specimen, and is aware of Spider-Man's true identity of Peter Parker. Dr. Octopus' fame has stretched beyond the pages of Marvel Comics: action figures, newspaper strips, video games, trading cards, a novel (1978's Mayhem in Manhattan by Len Wein and Marv Wolfman), and even a 7-11 Slurpee cup have sported his ugly mug. Doc Ock has been featured in most of Spider-Man's forays into television animation, portrayed over the years by voice actors Tom Harvey, Stan Jones, Michael Bell, and Efrem Zimbalist, Jr. When Titanic and Terminator director James Cameron was developing a Spider-Man live-action movie throughout the 1990s, Dr. Octopus was considered as the villain with Arnold Schwarzenegger in the role; Cameron's version never materialized. Alfred Molina, however, finally brought Doc Ock to life in director Sam Raimi's blockbuster Spider-Man 2 (2004). Instead of a strict reliance upon computer-generated effects for Ock, Raimi often used fiberglass mechanical arms controlled by puppeteers for a more organic effect.
The Supervillain Book: The Evil Side of Comics and Hollywood © 2006 Visible Ink Press®. All rights reserved.

Feedback
Flashcards & Bookmarks ?
Please log in or register to use Flashcards and Bookmarks. You can also log in with
Flashcards ?
My bookmarks ?
+ Add current page to bookmarks
Mentioned in ?
References in periodicals archive ?
For example, Peter Parker's money struggles and relationship issues received just as much attention as his struggles with villain's such as Green Goblin or Dr. Octopus. This unseen at the time level of maturity in comic books is largely considered one of the primary reasons many of his creations are still celebrated and enjoyed today by young and old alike.
Signaleer Spotlight
The world of small comics has delights to the discerning fan that one more fist fight between Spider-Man and Dr. Octopus just can't offer.
The embarrassment of riches
A worked-out Tobey Maguire returns as Spidey, fighting Alfred Molina's Dr. Octopus. Molina's first claim to fame, you'll recall, was as Joe Orton's lover-killer, Kenneth Halliwell, in Prick Up Your Ears.
Summer movie preview: our annual guide to the gayest films of the season--and the ones that ought to be gayer
One-upmanship did a number on "Spider-Man 3," with its multiple villains failing to equal Alfred Molina's great Dr. Octopus from the second movie; "Pirates of the Caribbean: At World's End" was one of the most profoundly baffling movies I've ever sat through, and "Terminator 3: Rise of the Machines," pitted Arnold Schwarzenegger against a sexy Terminatrix from the future ...
We're just wild about Harry ... but only to a point
He discusses comics before Hiroshima, including strips like Buck Rogers and Flash Gordon; the period from 1945 to the early 1960s, with comics that had superheroes who boasted atomic origins, like Atomic Man; and the period from the mid-1950s to the present, discussing the antinuclear efforts of counterculture "comix" artists and newspaper cartoonists, nuclear superheroes like Spiderman, Solar, Firestorm, and Captain Atom, and adversaries like Dr. Octopus and the Atomic Skull.
Atomic comics; cartoonists confront the nuclear world
Sunday Spider-Man 2 C5 7.40pm Tobey Maguire dons his tights (pictured) for a second bout of webslinging, with Alfred Molina providing the series' best villain as tentacled Dr. Octopus.
Films of the week
The Marvel comic book series has six villains who make the lethal combination the "Sinister Six." The villains include Dr. Octopus, Electro, Kraven the Hunter, Sandman, Mysterio and Vulture.
'Amazing Spider Man 3' Release Date Pushed To 2018: Plot Details Emerge, 'Sinister Six' To Get Prior Release
This exoskeleton is based on Dr. Octopus from Spider-Man, which Meehan aims to wear at cosplay events.
On the Web: The latest blogs and videos from editors, design engineers, and top executives
In the final issue of the Marvel comic book, Parker -- who recently switched minds with the terminally ill supervillain Otto Octavius, a.k.a Dr. Octopus -- struggles to free himself from Dr.
Is Peter Parker Death The End For Spider-Man? Spidey To Be Continued By Doctor Octopus