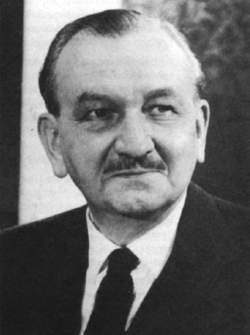 Raymond Huntley, who played Abraham Van Helsing in the stage version of Dracula.

The first vampire story by John Polidori, published in 1819, immediately inspired a number of stage adaptations in Paris and London. No such wave of enthusiasm followed Dracula‘s publication in 1897. However, shortly after his novel was published, author Bram Stoker did assemble the members of the Lyceum Theatre company and worked with them for a dramatic presentation of the book. That one-time event was held merely to establish Stoker’s ownership of the book’s plot and dialogue.

The story of Dracula’s initial appearance on stage began in 1899 when Hamilton Deane, having quit his job as a London bank clerk, made his stage debut with the Henry Irving Vacation Company. There he met Bram Stoker and read Dracula. He saw its dramatic potential at once, and concluded that someone should write a stage play based upon it. But Deane had a career to concentrate on, and over the following years he spent his time becoming first a well-known actor and then the head of his own theater company. In 1918 Deane ended a lengthy stay on the New York stage and returned to England; in his suitcase was a copy of Dracula. As he moved through the British theatrical world, he approached numerous authors to write the Dracula play. He even went so far as to outline the acts and scenes. Most writers gave up in the face of the numerous characters and complicated subplots. Finally, during a period of sickness in 1923, Deane took the suggestion of one of his actresses and started to write the play himself. He became immersed in the new drama and finished it in four weeks. He obtained permission from Stoker’s widow to use the material. The play debuted in Derby in June 1924.

This production became immensely important in the development of the modern image of the vampire. In the original novel, Dracula was dressed completely in black. He was an aristocrat of arrogant manners, and very bad breath. In contrast, Deane gave Dracula a somewhat sanitized presence. Dracula was dressed in formal evening wear, complete with an opera cloak that would further identify him with the bat. A cape had been mentioned by Stoker, most dramatically when it spread out as Dracula was crawling on the outside wall of Castle Dracula. While Dracula rarely appeared in London, he entered the play ready to match wits with the other characters, especially Abraham Van Helsing, rather than simply hovering as a presence backstage. Deane, in his negotiations with Florence Stoker, seemed to have consciously moved away from the image of the film Nosferatu, Eine Symphonie des Garuens, in which Dracula was portrayed as a monster of truly odd appearance, not a character that could interact with polite society. To reduce the storyline to manageable proportions, Deane cut out the first section of the book, which took place in Transylvania, and allowed the play to open in London in the Hempstead home of Jonathan Harker. The play then followed the storyline of the book, except that Dracula was killed at Carfax, his British home, instead of being tracked to the Continent. For the original performances, the government licensing agent insisted that Dracula’s death not be shown; hence the cast gathered around the coffin and blocked the audience’s view of the staking.

Deane also wrote what became a noteworthy addendum to the play. After the final act, as members of the audience were preparing to leave, he appeared on stage, still in his Van Helsing persona. He addressed them briefly, apologizing beforehand if the play were to cause nightmares, but then, tongue-in-cheek, warning that there might be such things as vampires. Deane assumed the role of Van Helsing; his future wife, Dora Mary Patrick, played Mina. Edmund Blake became the first actor to play Dracula. He was soon followed by Raymond Huntley. The character of Quincey Morris, the Texan who courted Lucy, became a woman, ostensibly to create an additional part for a female member of the Deane Theatre Company. Deane’s company traveled for three years around England and Scotland. So popular was the play, that it began to push aside other plays in the company’s repertoire.

In 1927, Deane decided to risk the play in London. It opened on February 14 at the Little Theatre on the West End. As he had expected, the press reviews were quite hostile. Almost everything about the play was criticized, and Deane thought that it would have a very short run. Instead, the public overrode the critics, and Dracula sold out night after night. Over the summer, the production moved to the larger Duke of York’s Theatre. Deane turned an off-the-cuff comment by a newspaperman into one of the more famous publicity stunts in theatrical history. He had the Queen Alexandra Hospital send over a nurse who could attend to anyone who fainted from fright during the course of the play. At the end of one performance, a reported thirty-nine members of the audience took advantage of her presence.

A problem developed when Deane decided to take his company back on the road. Wanting to continue the London success, Florence Stoker commissioned a second Dracula play. A much inferior drama, it had only a brief run, by which time she had completed an agreement with Deane. About the same time she accepted an offer from New York producer Horace Liveright to stage a version of Deane’s play on Broadway. Liveright engaged John L. Balderston to do a complete rewrite.

The Balderston version was even further removed from the book. Lucy Westenra and Mina Murray were collapsed into a single character, Lucy Seward, who became the daughter of Dr. John Seward. Seward, one of Lucy’s youthful suitors in the novel, became a middle-aged father of a grown daughter. Lucy’s other two suitors, Quincey P. Morris and Arthur Holmwood (Lord Godalming) completely disappeared. The Balderston play opened in the library of Seward’s sanatorium. Huntley, originally offered the Dracula role, declined. The part was given to a little-known actor who could not understand English, Bela Lugosi. Bernard H. Jukes came from England to play R. N. Renfield. The Balderston production was tried out in New Haven, Connecticut, and then opened formally at the Fulton Theater in New York City on October 5, 1927. The play ran for 241 performances. It reopened in Los Angeles and San Francisco with Lugosi and Jukes joining the West Coast cast. Touring companies were established for the Midwest and the East Coast. The success of the American play led directly to the purchase of its rights by Universal and its translation to the motion picture screen. The Balderston version of Dracula was published by Samuel French in 1933 and has since been made available for stage production and screen adaptation.

Meanwhile, Hamilton Deane continued to produce the play in England, the movie version having given it new life. In 1939 he presented it in the Lyceum Theatre in London, the very theater where Bram Stoker had worked when he was writing Dracula. These last performances at the Lyceum were made more memorable one evening when Lugosi attended and came on stage to embrace Deane at the play’s conclusion. Following Dracula‘s run, and a brief run of Hamlet, the theater closed forever. Deane continued the play in London for two more years.

Dracula was produced by different companies on a number of occasions through the years, but it experienced a major revival in 1977, opening on Broadway October 20th, fifty years after its debut. Frank Langella assumed the title role. Equally heralded were the scenery and costumes by Edward Gorey. (Gorey had designed the scenery for the summer theater production of the Nantucket Stage Company on Nantucket Island, Massachusetts.) The new production received two Tony Awards, for best production of a revival and best costume design. It then served as a basis for the 1979 film starring Langella and directed by John Badham. Since its publication by Samuel French, the Deane-Balderston play has been popular for local drama groups and is annually produced by both amateur and semi-professional theaters around the country.