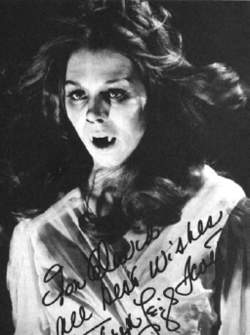 Kathryn Leigh Scott, who portrayed Maggie Evans in the original Dark Shadows, was a featured guest at the Dracula ‘97 convention.

Dracula ‘97: A Centennial Celebration was an international commemoration of the publication of the novel Dracula held in Los Angeles from August 14–17, 1997. The largest of the several Dracula centennial fests held throughout 1997 and 1998, Dracula ‘97 attracted more than 600 attendees and more than 100 presenters. It was cosponsored by the American and Canadian chapters of the Transylvanian Society of Dracula and the Count Dracula Fan Club. The event was chaired by J. Gordon Melton who was joined on the executive committee by Elizabeth Miller and Dr. Jeanne Youngson. They, in turn, were assisted by Chelsea Quinn Yarbro (literary program), Del and Sue Howison of Dark Delicacies (exhibits), Karen Tate (travel), Norman Kaeseberg (stage), Julia Winden Fey (film festival), Mary Tokita (press), and David Skal (awards). Norinne Dresser also served on the planning committee.

Elizabeth Miller was in charge of organizing the heart of the gathering, a scholarly conference that included approximately ninety papers that covered the spectrum of issues in vampire and Dracula studies. Included were approximately thirty scholars from outside the United States, including six historians and folklorists from Romania. An anthology from the papers was published in 1998. Miller also oversaw Dracula ‘97’s literary contest and edited the volume of winning essays, poems, and short fiction. A wide variety of stars from memorable vampire films and the television series Dark Shadows were on hand to greet their many fans. Lopita Tovar, who as a 19 year-old starred in the 1931 Spanish Dracula, and Carla Laemle, who as a teenager spoke the very first words in the opening scene of Bela Lugosi‘s Dracula, appeared, along with Hammer Films stars Ingrid Pitt, Veronica Carlson, and Yutte Stinsgaard. Actresses Lara Parker and Kathryn Leigh Scott from the original Dark Shadows series also highlighted the Friday evening program. A special salute to Bela Lugosi made up the Thursday evening opening program, featuring reminiscences by Bela Lugosi, Jr.

Honored guests for the event were comedian Elvira (media guest of honor), author Fred Saberhagen (literary guest of honor), and publisher Robert Eighteen-Bisang (publisher guest of honor). The program was ably chaired by cartoonist Gahan Wilson (toastmaster), lecturer Vincent Hillyer (master of ceremonies), and nightclub owner Blade Rhino (Saturday evening masquerade contest). Awards were presented to a variety of authors, books, and films voted the best in their category and the work of many leaders of vampire fandom was acknowledged. Entertainment ran the spectrum from drama (Collinwood Players) and dance (Paul Ebey, Susanne Muldowny) to music (Barry Fisher’s Dracmaniacs, Vlad and the Dark Theatre, and Element). Several additional centennial celebrations were also held in 1997 in North America and Europe, including a large German Dracula centennial conference convened at Wetzlar.