a method of land reclamation by means of artificial underground channels (drains). The term “drainage” also refers to the structure or system of channels (for example, earthenware). In foreign countries (the United States and Great Britain), drainage is taken to mean any type of drying of land. Drainage is used for reclamation of excessively moist lands (drying drainage), for combating salinization in arid zones (desalinization drainage), and for strengthening gas exchange in heavy clay soils (aeration drainage, which is seldom used independently).

Historical information. The use of earthenware drainage in 2000 B.C. is attested (in Mesopotamia). Drainage was well known in ancient Rome. Agricultural drainage began to be used in Europe (France and Great Britain) in the 17th and 18th centuries. The first drainage system of a modern variety was constructed in Great Britain (Suffolk County) in 1727, and the basis for its use was provided by J. Elkington in 1764. Drainage of farmland made very significant advances in the second half of the 19th century after the invention of an efficient machine for manufacturing of earthenware pipes (1843, Great Britain). By 1856 in Great Britain 500,000 hectares (ha) of farmland had been reclaimed. Agricultural drainage began to be used in Russia only in the second half of the 19th century (Gorki in Byelorussia, Courland Province, and Novgorod Province). The total area of drainage of agricultural land before the October Revolution (not including the territories of the Baltic republics) was 2,000-3,000 ha; by 1956 in the USSR it was 800,000 ha; and by 1971, more than 3.4 million ha. In the world as a whole, more than 20 million ha of farmland have been reclaimed by drainage, including 10 million ha in the United States and 3 million ha in Great Britain (1969).

Drying drainage. Drying drainage is necessary on land where the depth of subsoil water is less than the reclamation standard. Horizontal systematic pipe drainage (evenly distributed over the area being reclaimed), which is a system of pipes in the form of continuous drainage lines, is usually used in the USSR. Subsoil water enters the joints between pipes or openings in the pipes because of a pressure differential, in view of which the depth at which the pipes are laid must exceed the reclamation standard. Drainage operates more intensively during “critical periods” of intensified supply of subsoil water, usually in the spring and fall. The operation of drainage in discharging excess water during the spring is shown in Figure 1. Figure 1. Operation of horizontal drainage during discharge of excess water in spring

remove melt water that has entered the soil and lower the surface of subsoil waters to the reclamation standard a (in meters); H is the supply of water in the snow cover (in m3/ha), T is the depth of the water-resistant surface (in meters), D is the drains, Tr are trenches, and P is the pressure, which is taken to be zero. For mineral soils, b is usually taken as equal to 1.1 m; for peat bogs, 1.3-1.5 m. The distance between neighboring drains (within the limits of 15-50 m) is determined by the formula

where C1 is a coefficient for taking into account imperfections in the drains, based on the extent to which the bed is not sealed, and D1 is a similar coefficient for the intake surface of drains (earthenware)—that is,

Drainage systems are shown in Figure 2. Water that has entered the drain will pass from its source to the drain mouth, for which drain lines (not longer than 150-200 m) are given a slope of not less than 0.002. From the drains water enters open conduits or closed conduits (from pipes) not longer than 1,000 m, from which it empties into a main drainage channel and is removed from the area being reclaimed. 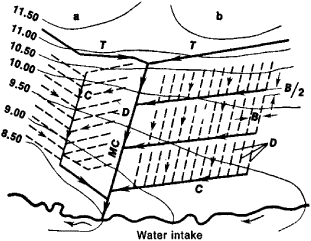 Earthenware drainpipes 4-10 cm in diameter and 33 cm long are usually used for reclamation of mineral soils. They are laid on the bottom of a trench (or on a plank board in unstable soils) very close to one another (width of the joint is not more than 1-2 mm) and covered with filtering material (moss, fiberglass, or glass fabric). The trench is then filled with earth. The service life of earthenware drainage systems is 50-80 years. They may be used on peat bogs only after preliminary draining of areas by open channels. Wooden drainage systems are also used in such cases; they consist of a plank with pipes of rectangular cross section made from boards, with a longitudinal slit left in them. Plastic drainage systems are also widely used; they consist of plastic pipes with longitudinal slits or round openings laid in an open trench or molded immediately behind the drainer (trenchless drainage, which permits complete mechanization of installation). On land with poor water permeability, discharge of surface waters and perched water tables is accelerated by using a system of closed collectors; earthenware pipes are laid in a trench situated at right angles to the slope at a depth of 0.8-1.0 m and covered with earth taken from the layer of topsoil or with another water-permeable material. The length of the collectors is 150-200 m; the distance between them, when supplemented by mole drainage (combined drainage), is 30-60 m. Mole drainage is a system of cavities with non-reinforced walls evenly distributed over a given area; the cavities are 2-10 m apart at a depth of 0.6-0.8 m. The service life of mole drainage is up to five years; it is used in stable soils (clayey soils and slightly decayed peat bogs).

Desalinization drainage. Desalinization drainage is used to lower the level of subsoil waters, to discharge eluate, and to combat salinization of irrigated land situated in arid zones. Desalinzation drainage is characterized by the reclamation period (one to three years), during which a layer of soil 1-2 m thick is desalinized and saline groundwater is discharged, and by the operational period, during which the results achieved are maintained. Horizontal and vertical desalinization drainage is used on irrigated land. The most expedient method is horizontal, relatively deep (about 3 m), continuous, systematic pipe drainage, supplemented during the reclamation period by open channels about 1 m deep and approximately 20-50 m apart. Drains of earthenware, asbestos-cement, or plastic pipes (the last two types have openings) are laid in a trench, covered with graded gravel, and filled with the soil that had been removed. The desirable length of the pipes is up to 1 km; the slope, not less than 0.001 at the bottom; and the distance between the drains, 150-400 m. The determining factor for successful operation of horizontal desalinization drainage is the operation of the drainage network without a backwater and the normal discharge of drainage water into a water receptacle. If gravity-flow discharge is not ensured, pumping stations are installed.

Vertical systematic drainage is a system of vertical wells, evenly distributed over a large area, from which water is pumped. The wells are 30-150 m deep and 15-50 cm in diameter; the height of pumping is 6-20 m; the flow rate is 25-300 1/sec; and there is one well per 50-200 ha. Vertical drainage systems operate successfully when there is a sufficiently thick water-permeable bed that is hydraulically connected to the soil being reclaimed. The water that is being pumped out may be used for irrigation (this method is widespread in India, the USA, and other countries and is used in Uzbekistan, Tadzhikistan, Azerbaijan, Kirghizia, and other regions of the USSR).

Head (sectional) drains and screens. Head (sectional) drains and screens are used to intercept subterranean water entering the soil from elevated areas (head drainage) or for protection from flooding and rising waters of reservoirs and rivers (screens, or coastal drainage). Large-diameter drains (sometimes as tall as a man) or vertical wells, either self-discharging or with group pumping (open channels are used for this purpose), are laid at right angles to the flow movement of the underground water along the borders of the area being protected.

Feedback
Flashcards & Bookmarks ?
Please log in or register to use Flashcards and Bookmarks. You can also log in with
Flashcards ?
My bookmarks ?
+ Add current page to bookmarks
Mentioned in ?
References in periodicals archive ?
Future efforts will focus on raising awareness of the NRCS Drainage Water Management conservation practice standard and the importance of updating the nation's drainage of farmland. Workshops for farmers will provide tools and information showing that water saved by improved drainage is a mitigation source during droughts.
Upgrading America's underground drainage network
While improved drainage of farmland had led to some increase in the speed with which rainwater ran off the land and into rivers, he said, most of this work was completed more than 20 years ago and could not be blamed for the recent upsurge in problems.
Farmers deny any blame for flooding; Surface tension: MPs claim winter wheat planting worsens water run-off
By the mid-1980s, the tide had changed such that enrollment in USDA conservation programs restricted drainage of farmlands. However, as Biebighauser explains, landowners of areas that had been previously drained, designated as PC (prior conversion), were allowed to "further drain wetlands without having to obtain the permits required for similar activities under Section 404 of the Clean Water Act."
Reversing wetlands history