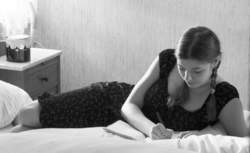 Writing down one’s dreams into a dream diary immediately after waking will help you remember valuable information that can be analyzed later.

As research on sleep learning and on so-called nondreamers has demonstrated, the memory-processing mechanisms of the brain appear to be switched off (or at least to be “off-line”) during sleep. These findings explain why dreams are often so difficult to remember. Even people who remember their dreams every night only remember the last several dreams they had immediately before awakening. Dreams from the early and middle periods of sleep are permanently forgotten.

A widely utilized method for holding on to dream memories is a dream diary, in which individuals record as many dreams as they can remember immediately upon awakening. Controlled studies have empirically verified the common observation among people who keep dream diaries that this recording must be done immediately, before other thoughts, such as considerations about the upcoming day, are allowed to intrude. In one experiment, for example, participants were instructed to call up for local weather information immediately upon awakening and write down a couple of items from the forecast before recording their dreams. Subjects who completed this task were able to recall far fewer dreams than participants who went immediately to the task of writing down dreams without first telephoning the weather bureau.

Feedback
Flashcards & Bookmarks ?
Please log in or register to use Flashcards and Bookmarks. You can also log in with
Flashcards ?
My bookmarks ?
+ Add current page to bookmarks
Mentioned in ?
References in periodicals archive ?
Several films are supported by UNHCR such as The Dream Diaries, A Young Girl Scarred by War, Nyahok's Quest, Little Omar Flies of Finland, RefuSHE Kenya's Safe house, Sudanese Refugee girl chases education dream in Egypt, Deaf Refugee boys discover new world of sound and Refugee Taekwando .
Sharjah International Children's Film Festival to screen 13 shorts on refugees
Articulated via dream diaries (seen at late Britain in vitrines) kept by seven people sleeping within "fairy rings" of mushrooms in a supposedly enchanted Hampshire field, this lasting topic was the stubborn, abyssal irrationality of the human mind.
Susan Hiller
Following the demise of the Wild Swans, Simpson remained active with solo projects including Skyray and The Dream Diaries, a spoken word piece that came out of serving a fellowship at John Moores University.
Lost band ready to take flight twenty years on; Wild Swans are back in business, Vicky Anderson reports
It could not have been captured in a diary, and anyway could one even conceive of keeping a real diary in those days?" (24) Chukovskaya's dream diaries have not survived, but other people's dreams of terror have reached us, mostly in publications from recent years.
Dreams of terror: dreams from Stalinist Russia as a historical source
The complex and wide-ranging Caroline debate over "fancy" was, in essence, an exploration of "the assets and liabilities of imagination in worship" (91), and Barbour carefully shows how this debate played out in a variety of arenas, including Land's dream diaries, Andrewes' sermons, and Shirley's masques.
Reid Barbour. Literature and Religious Culture in Seventeenth-Century England