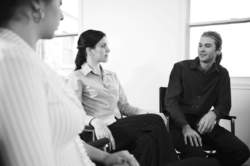 For centuries, many traditional cultures have believed in sharing their dreams within the family and community. Modern Western cultures have carried on that concept through the idea of group therapy sessions.

Dream sharing is a common practice in many cultures, as revealed by a number of anthropological studies. Among the Hopi, good dreams are to be held in the heart, whereas bad dreams are considered to contain bad thoughts that must be eliminated by discussing them and working out the problems revealed by the dreams through confession of questionable behavior. The Quiche, on the other hand, insist that everyone dreams every night, and daily sharing or reporting of all dreams, whether the dreamer feels they are good or bad, is considered an important practice.

Among the Rastafarians, dream experience is among the various subjects of speculation during the communicative event of reasoning, and dream reporting by the elders is used to authenticate their tutorial role. Dream sharing constitutes a fundamental element in the education of children and an important practice in everyday life for the Senoi, as they claim that everything in a dream has a purpose beyond one’s understanding when asleep.

Dreams play a fundamental role in Kagwahiv culture and are to be told at any time; they can be shared in the middle of the night as well as during the day over work. In Morocco, in order to acquire a good interpretation of one’s dreams, it is very common to share them, to use them in different ways in communication, and to consult an external dream specialist.

Among the Raramuri of northern Mexico, dreams are a frequent topic of conversation in the morning within households as well as among the members of different households. In addition, since the Raramuri usually sleep for a few hours, wake up, and then sleep again, they frequently analyze dreams during the course of the night. These discussions constitute an important means of transmission of culture and ideology in the absence of more formal institutions.

Among the Sambia of Papua New Guinea, dream sharing occurs in a variety of different contexts, both public and private. The principal situation in which dreams are shared is when they are discussed by household members. Dream sharing also occurs frequently at healing ceremonies, initiation rituals, public and secret storytelling sessions, gossip sessions, and during hunting, trading, and gardening trips. It is very common for people living in Tikopia to reveal their dreams, although no systematic scheme of telling them exists. Dreams are usually reported in a casual way, at any time of the day.

The Zuni of New Mexico share their dreams among members of their matrilocal extended household, as well as among friends. However, not all dream experiences are immediately reported; some are not reported until many years later. Since Zunis are unwilling to give away luck through careless talk or bragging before it can be realized, all good dreams are discussed with others only after the good things foretold have come true. Therefore, accounts of old dreams consist of both bad dreams, including nightmares, and good dreams, whereas reports of recent dream experiences always concern bad dreams.

To understand how people experience, share, and interpret their dreams requires a full understanding of their culture. Dream sharing and interpretation often have important effects on other cultural structures. In fact, there is a mutual influence between dreaming and culture.

Also, it has been asserted that dream sharing presents a number of problems in traditional psychoanalysis, since the manifest content of a dream is insufficient, may be distorted, and must be amplified by free association. Usually the dream as narrated is not meaningful as such, but rather the true message begins with the translation of the manifest dream into its latent meaning, which is removed from the original dream experience.

Dream sharing has recently—within the past couple of decades—gained considerable prestige in contemporary Western societies. Montague Ullman was a psychoanalytically trained psychologist who founded the Dream Laboratory at the Maimonides Medical Center in New York during the 1960s. He was very concerned with developing ways of making psychiatric services available in communities that did not have easy access to them. In hopes of furthering his work in the realm of community mental health, Ullman moved his practice to Sweden in the 1970s. In both countries, Ullman focused on different aspects of “dream appreciation,” but in Sweden he was able to obtain government funding to support his community dream-sharing groups. Ullman believed that sharing dreams and nightmares in a group setting was helpful to the dreamer because it not only provided support, but it was also easier for others to offer different perspectives on the meaning behind the dream symbolism.

Ullman developed a five-step process he found to be effective when sharing dreams in a group setting. The first step must obviously be when the dreamer shares his or her dream, which is followed by group reflection on the dream’s content. This includes feelings, images, and metaphors they believe are represented by the dream imagery. During this second step, the dreamer does not comment on the group’s opinions. Instead, he or she responds, without further comment from the group, in the third step. The fourth step is when the dialogue between the dreamer and the group actually takes place. Finally, the dreamer is able to reflect, alone, on the meanings discussed by the group. These steps are covered more extensively in the book Working with Dream (1979), which Ullman wrote with Nan Zimmerman. Ullman is careful to emphasize that it is only after the five steps of the dream-sharing are completed that the dreamer’s job really begins.

One of the other leaders in modern dream-sharing therapy is Jeremy Taylor. He is a Unitarian Universalist minister who held his first formal dream-sharing group during a seminar in which he hoped to raise consciousness on racism. He asked those present at the seminar to discuss any dreams they had of African Americans. The following is an excerpt from his book DreamWork (1983):

The energy for growth and transformation of personality and unconscious attitudes and fears that were released by this work was truly astonishing, even to me. The dream work was effective in bringing deep-seated unconscious ambivalences to light, and the work was further effective in transforming them, because each of us was forced to “own” both the negative and positive images of black people in our dreams as representations of aspects of our own personalities.

It is Taylor’s belief that the invaluable aspect of dreams and sharing them with a group derives from the way the group is able to expose a fuller range of possible meanings and provides the opportunity to explore multiple meanings. He suggests that a group of six to twelve people, with one person serving as the facilitator, yields the most positive results. He also recommends that they meet in a quiet place and have a “touch-in” in which everyone discusses how they are doing, before starting the process of sharing dreams. After the group greets one another, each member proceeds to share one dream. From these the group chooses one they would like to discuss. They are then able to offer comments, ask questions, or suggest meanings that are relevant to that one particular dream; this may take anywhere from fifteen minutes to a few hours, but it is best to discuss more than one dream per meeting.

Taylor’s dream groups used the “if it were my dream” method when commenting on the dreams of others. This meant that instead of saying, “You’re dream means …” they began their comments with “If it were my dream … “ This reminded the group that the dream ultimately belongs to the dreamer and prevented the group from coming across as confrontational or rude. By considering these factors, Taylor was able to give dreamers more room to reflect on what the dream meant to them, while at the same time taking the suggestions of the group into account. The ultimate goal of Taylor’s dream work was to help individuals overcome personal barriers such as race, age, sex, and social class.