a covered passage beneath a kurgan (burial mound) leading to a burial chamber; a passageway to a crypt cut into the subsoil or bedrock. A dromos may be horizontal or inclined and sometimes resembles a staircase. The oldest dromi have been found in Aegean and Etruscan sepulchers; several dating from the fourth century B.C. to the third and fourth centuries A.D. are scattered throughout the Northern Black Sea Shore of southern Russia. 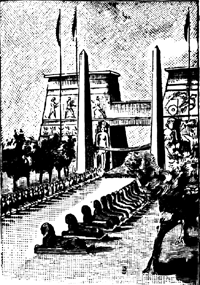