a principle formulated in some branches of mathematics and consisting in the fact that to each true statement of the branch in question corresponds a dual statement which may be derived from the first by substituting the concepts entering into it with other, so-called, dual concepts. 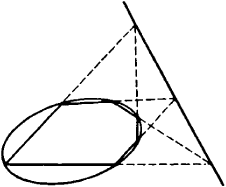 Example l. To the valid relationship

Example 2. To the valid relationship

where Ā, B are the complements of sets A, B in set M, A ∪ B is the union of sets A and B, and A ∩ B is their intersection.

(3) The principle of duality also occurs in mathematical logic (in propositional calculus and in predicate calculus).