a mode of operation of an electric drive in which a braking force is created by the interaction of a constant magnetic flux in an electric motor with the current of a closed electric conducting circuit. In an electric drive with a DC motor, dynamic braking is produced by short-circuiting the armature winding or by closing its circuit through added active resistance when the field winding is energized. In an electric drive with an asynchronous motor, dynamic braking is achieved by passing a direct current through the stator winding; in this case, the rotor winding forms a closed circuit. Dynamic braking of a synchronous electric motor occurs when the field winding is energized and the stator winding circuit is shorted or closed by means of added active resistance.

Examples of the connection of DC and AC motors to produce dynamic braking are shown in Figure 1. 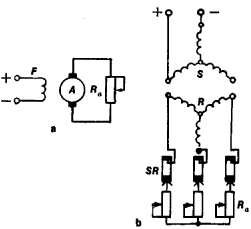 Figure 2. Speed-torque characteristics of dynamic braking for (a) a DC motor and (b) an asynchronous motor: (n) frequency of revolution of electric motor, (MB) braking moment, (R1,-R4) added resistances