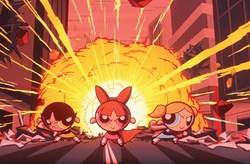 Imagine a fairytale gone awry: When Professor Utonium accidentally knocks over a vial of Chemical X, his superheroine trio, the Powerpuff Girls, is born. Originally designed to be a family of perfect sisters concocted, literally, from the ingredients “sugar, spice, and everything nice,” instead these superpowered kindergartners kick butt, as they combat evil and advance the forces of good—all while mastering their ABCs. The team consists of Blossom (the leader of the group and brains of the operation), Bubbles (the overly sensitive and bubbly one who avoids sibling rivalry at all costs), and Buttercup (the tomboy of the group, always willing to fight first). Blossom’s element is everything nice, Bubbles’ element is sugar, and Buttercup’s is spice. Since their core elements vary, so do their superpowers: Blossom has ice breath, Bubbles can speak to animals and has a Super Sonic Scream, and Buttercup can create a tornado and shoot laser beams from her hands. All three can fly.

As the girls’ creator, father figure, and de facto mentor, Professor Utonium raises and trains the super-trio. Based in the city of Townsville, where the mayor is able to call the girls on his hotline whenever trouble arises, the girls attend kindergarten by morning and combat villains such as Mojo Jojo, Him, the Amoeba Boys, the Gang Green Gang, Roach Coach, Elmer Sglue, Seduca, and the Rowdyruff Boys by afternoon. They are also guided by their teacher, Ms. Keane, who educates them in kiddy curriculum and the benefits of peaceful resolution at Pokey Oaks Kindergarten.

One of Cartoon Network’s original animated series, The Powerpuff Girls is the inspiration of animator Craig McCracken, who first conceived of the superheroine trio as a project for a college class at the California Arts Institution in 1992. Three years later Cartoon Network executives saw McCracken’s concept and gave the girls their first pilot in 1995; a second pilot soon followed. By 1998, The Powerpuff Girls was a television series, raved about for its rich blend of action, engaging storytelling, and smart humor. Behind-the-scenes talent includes McCracken (who also serves as the show’s executive producer), Dexter’s Laboratory creator Genndy Tar-takovsky (who often directs), and the voice talents of Catherine Cavadini (Blossom), Tara Strong (Bubbles), and Elizabeth Daily (Buttercup). Since landing their own gig, the Powerpuff Girls have fared well for themselves, drawing strong ratings, winning awards, and branding themselves on a wide array of girl merchandise, including clothing, lunchboxes, jewelry, dolls, and toys.