electroencephalography (əlĕkˌtrōĕnsĕfˌəlŏgˈrafē), science of recording and analyzing the electrical activity of the brain. Electrodes, placed on or just under the scalp, are linked to an electroencephalograph, which is an amplifier connected to a mechanism that converts electrical impulses into the vertical movement of a pen over a sheet of paper. The recording traced by the pen is called an electroencephalogram (EEG). Readings may be obtained for a particular brain site by coupling a single electrode with an indifferent, or neutral, lead (monopolar technique) or between two areas of the brain through two independent electrodes (bipolar technique). The combination of impulses that are being recorded at any one time is called a montage.

The electrical activity of the brain was first demonstrated in 1929 by the German psychiatrist Hans Berger. The scientific professions were slow in giving proper attention to Berger's discovery of the brain rhythms he named alpha waves, but since then at least three other standard brainwave patterns have been isolated and identified. Alpha waves are fast, medium-amplitude oscillations, now known to represent the background activity of the brain in the physically and psychologically healthy adult. They are most characteristically visible during dream-sleep or when a subject is relaxing with eyes closed. Delta waves are large, slow-moving, regular waves, typically associated with the deepest levels of sleep. In children up to the age of puberty the appearance of high-amplitude theta waves, having a velocity between those of alpha and delta rhythms, usually signals the onset of emotional stimulation. The presence of theta waves in adults may be a sign of brain damage or of an immature personality. Beta rhythms are small, very fast wave patterns that indicate intense physiological stress, such as that resulting from barbiturate intoxification.

By observing abnormalities in recordings and determining the area of the brain from which they originate, the physician's ability to diagnose and treat such conditions as epilepsy, cerebral tumor, encephalitis, and stroke, is greatly enhanced. Electroencephalograms have also proved valuable in the general study of brain physiology and in the particular study of sleep. Various types of Eastern meditation, e.g., yoga, use techniques that increase alpha and theta wave activity. Because of concomitant physiological changes during meditation, e.g., lessened anxiety, the techniques have recently become popular in the West. Using EEGs to enhance biofeedback, a subject can be taught to monitor and regulate his or her own brain waves; the technique has been used experimentally in control of epilepsy. EEGs are also used to determine brain death (see death).
The Columbia Electronic Encyclopedia™ Copyright © 2022, Columbia University Press. Licensed from Columbia University Press. All rights reserved. 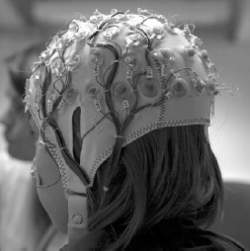 The human body is an electrochemical organism, although the electrical activities of the body are relatively weak in contrast to electrical appliances. Although weak, the electrical activity of the human body, particularly that of the nerves, can be measured. The brain is especially active in this regard, and electrical variations can be measured by means of electrodes taped to the head and face. The machines used for this purpose produce what is referred to as an electroencephalogram, or EEG. When recorded on a roll of paper, EEGs produce what looks like a wave pattern, hence the expression brain wave. Different stages of sleep are characterized by different brain wave patterns, and contemporary laboratory sleep research relies heavily on EEG measurements.

Feedback
Flashcards & Bookmarks ?
Please log in or register to use Flashcards and Bookmarks. You can also log in with
Flashcards ?
My bookmarks ?
+ Add current page to bookmarks
Mentioned in ?
References in periodicals archive ?
Wang, "Online removal of muscle artifact from electroencephalogram signals based on canonical correlation analysis," Clinical EEG and Neuroscience, vol.
Real-Time EEG Signal Enhancement Using Canonical Correlation Analysis and Gaussian Mixture Clustering
Hu, "Biometric system based on EEG signals by feature combination," in Proceedings of the 2010 International Conference on Measuring Technology and Mechatronics Automation (ICMTMA 2010), pp.
Combining Cryptography with EEG Biometrics
Although it was not planned at that moment to request a conventional EEG recording, given the high suspicion of NCSE recurrence, the neurophysiology team was urgently contacted and the NCSE recurrence was confirmed and treated.
Early Diagnosis of Nonconvulsive Status Epilepticus Recurrence with Raw EEG of a Bispectral Index Monitor
EEG acquisition system of EGI company (Eugene, the USA) is used in the experiment.
Exploration of Neural Activity under Cognitive Reappraisal Using Simultaneous EEG-fMRI Data and Kernel Canonical Correlation Analysis
Winners of 12th edition of Emirates Environmental Group (EEG) Environmental Drawing Competition were felicitated at a ceremony held in Dubai on Tuesday.
Environmental drawing contest winners felicitated in Dubai
This acquisition comes just nine months after CortiCare acquired the EEG assets of New York-based Safe Passage Inc., a company also providing ambulatory EEG monitoring services.
CortiCare Acquires At-Home EEG Brain Monitoring Provider Physicians Ancillary Services
This study also provides the opportunity to chart sleep EEG changes in association with brain maturation along with anthropometric and development screening assessment using Trivandrum Development Screening Chart (TDSC).
Establishment of electroencephalographic synchrony and continuity pattern along with disappearance of trace alternant in full-term newborns in a longitudinal pattern up to twelve months of age
EEG congratulates DEWA in hosting yet another successful Earth Hour.
Emirates Environmental Group Hosts a Unique Paper Recycling Campaign on Earth Hour 2018
The current method was pioneered by Nestor who successfully reconstructed facial images from functional magnetic resonance imaging (fMRI) data in the past, but this is the first time EEG has been used.
Mind-Reading Program Shows How Brain Sees Faces
EEG epochs of 12-second duration were saved, from the artefact-free region of the recording under the supervision of two neurologists.
Diagnosis of Encephalopathy Based on Energies of EEG Subbands Using Discrete Wavelet Transform and Support Vector Machine
This case highlights an unusual presentation of sCJD characterised by a rapidly progressive impairment of consciousness and seizure activity on EEG, leading to a diagnosis of NCSE.
Creutzfeldt-Jakob Disease Presenting as Nonconvulsive Status Epilepticus
"EEG allows for reliable prediction of poor outcome after cardiac arrest, with maximum sensitivity in the first 24 hours," the authors write.
Early EEG Helps Predict Cardiac Arrest Outcomes in Comatose; Continuous background pattern at six or 12 hours an independent predictor of good outcome