a spectral instrument consisting of a stack of glass or quartz plates of identical thickness, placed in optical contact so that they form a stairway of steps of equal height (Figure 1). It was first constructed by A. Michelson in 1898. 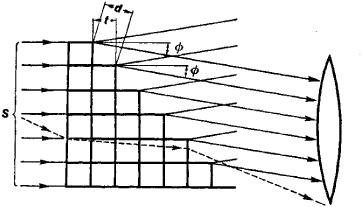 Figure 1. Path of rays in a transmission echelon. Initial beam of light S is directed onto the echelon at nearly perpendicular incidence. Therefore, angle of diffraction 0 of rays passing through the echelon is also very small (broken line shows path for oblique incidence); d is difference between paths of rays from neighboring steps and is almost equal to height of step t.

The Michelson echelon is used as a spectroscope. Its resolving power is extremely high, and it is suitable for analyzing very narrow (of the order of 1 X 10-11 to 2 X 1011 m) spectral regions. Therefore, a preliminary monochromatization of the light is usually carried out, that is, a narrow spectral region is cut out of the radiation for analysis in the echelon. Reflection Michelson echelons, whose resolving power is approximately four times greater than that of transmission echelons, are used for studying regions of the spectrum that are opaque to the material of the echelon regions.