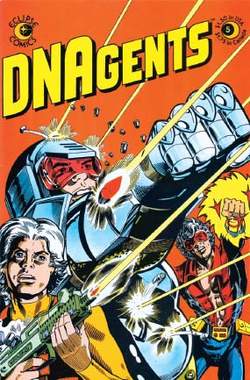 Eclipse was one of the first truly independent comics companies, beginning in 1977 and serving as a haven for many of the medium’s most thoughtful and edgy talents (like writers Don McGregor and Steve Gerber) when they’d been driven from the majors, while also offering a welcoming creative space for those who remained in the mainstream but sought more substantive outlets (like artists Marshall Rogers and Gene Colan). The company came into being with McGregor’s dystopian action saga Sabre, and continued for seventeen years with a diverse roster of everything from sci-fi, horror, and manga to satire, postmodern funny animals, and opera adaptations. In the mix, it didn’t shy away from the occasional quality superhero series.

In this area, Eclipse is probably best remembered as the stateside home of Alan Moore’s gloomy masterwork Miracleman. But there are other fan favorites as well, perhaps chief among them Mark Evanier and Will Meugniot’s long-running DNAgents. Debuting in 1983, when genetic engineering seemed more than a century away, the book concerns a troupe of specially-powered meta-humans created by a global corporation to do its often questionable bidding—and the questions these characters develop about the morality of their missions. Their corporate master, it is amusing to recall, was known as Matrix, and the book tapped into anti-big-business paranoia long before this theme became a staple of pop culture.

The series dealt with uneasy relationships between genetic “cultures” in the way Marvel’s X-Men books are known to—as an allegory for reallife friction between nations and races. Stories would revolve around unusual ethical themes, like the one in which a hostile potentate (the Commander) forces the armor-clad DNAgent Tank into a televised battle with a mighty assassin to prove the mutant race’s inferiority—but the assassin’s mercilessness increases public sympathy for the DNAgents instead. The book also took a novel approach to ubiquitous comics conventions of the day, as when DNAgents and DC’s Teen Titans held a “secret crossover,” in which the two actual teams never met, but a parallel narrative played out in each series concurrently, with the Agents thinly veiled and cleverly renamed “the Re-Combatants” in the Titan’s book and the Titans dubbed Project Youngblood in the Agents’ story.

The series ran for some four years and spawned several successful spinoffs, including a miniseries for the team’s electricity-generating hothead Surge, and a two-year run for the non-genetically-modified hero Crossfire (also written by Evanier, with artist Dan Spiegle). Crossfire was a Hollywood bail-bondsman by day and costumed vigilante by night, who seemingly found endless material in Evanier’s real-life discontents as a television scriptwriter.

In addition to the veteran creators of these series, Eclipse was known for giving promising new talents their first opportunities, and one such arrangement resulted in a series little noticed at the time but sought after by fans since: The Liberty Project, a book built around the novel concept of incarcerated supervillains given a shot at redemption through a kind of work-release as government-controlled superheroes. The series was drawn by James W. Fry and written by Kurt Busiek, a writer then known to few, but later acclaimed throughout the industry for comics like the groundbreaking Marvels and Astro City. (In 2003 The Liberty Project was put back in print in a collected volume from About Comics.)

Other Eclipse superheroes included the patriotic WWII champion Sgt. Strike and his modern counterpart Strike!, a black teenager who finds the high-tech harness that gave the Sgt. his superpowers. (These characters’ mythos tied into that of Airboy, Skywolf, and other headliners from an unusual 1940s genre of aviator heroes once published by Hillman and revived by Eclipse.) The eclectic stable included such others as the spacefaring superteam the New Wave, and one of Spider-Man co-creator Steve Ditko’s strange metaphysical heroes, Static (no relation to the later Milestone Comics star). Big names from the nomadic landscape of creator-owned properties, including Dave Stevens’ Rocketeer, also passed through the company’s pages.

Eclipse was committed to quality production values, creative freedom, and full ownership of its books by each one’s artists and writers. In this, it set a standard for integrity that not many of the get-rich-quick independents that followed it into comics’ mid-1980s to early 1990s boom bothered to match. Eclipse had helped bring about that boom by pioneering the practice of distributing comics directly and exclusively to specialty comic shops with a ready audience. But when that audience fell sharply after a craze driven by speculating collectors lost its steam, many comic shops shut their doors and Eclipse fell victim to the same system it had helped nurture, going out of business in 1994. It’s sad that Eclipse eventually lived up to its name, but any company would be proud to live up to its legacy.

Other superhero series originally published by Eclipse include I Am Coyote, which was created by the classic team of writer Steve Englehart and artist Marshall Rogers, and debuted in Eclipse Magazine #2 (July 1981). Its title character was a superhuman based on the trickster coyote of Native American mythology. Writer/artist B.C. Boyer’s The Masked Man, whose title character is a private eye who dons a mask to combat crime, much like the Spirit, debuted in Eclipse Magazine #7 (November 1982). The title character of Destroyer Duck #1, which Eclipse published in 1982, was created by writer Steve Gerber and legendary artist Jack Kirby to help raise money for Gerber’s lawsuit against Marvel Comics: that is why Destroyer Duck is a warrior who battles a corporation called Godcorp.

Eclipse also published the original Zot! series (1984–1990), the delightful and upbeat creation of writer/artist Scott McCloud, who is now best known for his landmark book about the comics medium, Understanding Comics (1993). One of the first important American comics influenced by the visual style of Japanese manga, Zot! starred Zachary T. Paleozogt, aka Zot, a teenage superhero from a parallel Earth. Other major characters included his leading lady, Jenny Weaver, and the villainous Dekko, a cyborg who resembled the Chrysler Building. McCloud did a new Zot! webcomic in 2000, and HarperCollins published a collected edition of the original series in 2008. —AMC & PS